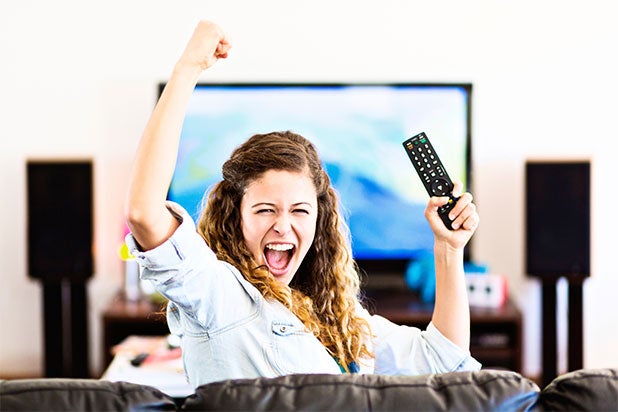 In our previous posts on box office trends, we discussed admissions, production budgets, the role of 3D and the international frontier. Ticket prices continue to rise and international has growth potential, but a domestic industry that exhibits an approximately 3 percent annual decline in admissions cannot continue on that path without risking disaster (see: Blockbuster Video).

Whatever the solution for studios and exhibitors, we can all agree that they must do something.

For studios, greater focus on tentpole releases with established fan bases brings up several issues. Fewer movies are being produced, so the risk is spread around fewer properties. Virtually no large franchises are available for acquisition. They are drawing a narrower audience given known titles, and consumers are beginning to demand less lag time between theatrical and home releases and ubiquitous digital access.

Meanwhile, exhibitors are facing continued pressure from declining traffic and a relatively stagnant box office. The 4K innovation does not seem poised to have the same kind of appeal that 3D does, and the cost disparity between two hours at the cinema and two hours at home is increasing. Plus, the quality of content on the small screen is now on par with — and sometimes even better than — that in theaters.

Whatever the solution for studios and exhibitors, it is apparent that they must do something. So what could that “something” be?

One of the more creative — and very controversial — new ideas is the Screening Room, a service backed by Napster co-founder Sean Parker. Essentially, it would allow consumers to access movies in their homes concurrent with the theatrical release for $50 per movie. The service requires a one-time purchase of a $150 set-top box.

Interestingly, reports say, theater owners get $20 of the $50 consumer fee, and the venture throws in two traditional cinema tickets for the consumer. The Screening Room is making great efforts to both provide an alternative to traditional cinema while offering benefits to the traditional cinema (both the $20 fee and the tickets trying to bring consumers back into the theater).

On the surface, the idea seems terrific for all segments of the traditional movie ecosystem. It appears that the Screening Room has something great to offer consumers, exhibitors and studios. 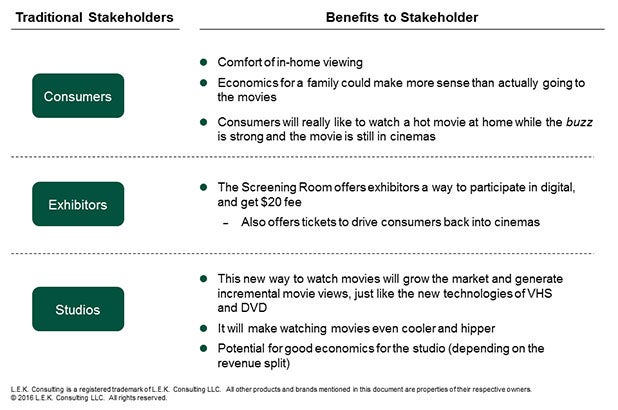 But various questions remain about this type of structure.

1. Do the economics actually work for both consumers and exhibitors?

L.E.K. Consulting’s prior research in the area indicates that the $50 fee would please a good number of wealthy consumers, fangirls/fanboys and some other selected segments of movie enthusiasts. Many kids would love to see “Star Wars: The Force Awakens” in their homes, but exactly how many people are willing to pay this price point or can afford it?

And the concerns of traditional exhibitors are certainly valid. Picture what happens if a $50 home movie purchase via the Screening Room stops a family of five from going to a traditional cinema. Without the sale of five tickets and the family’s normal spend on food and beverages, cinemas could be down far more than the $20 they receive from the Screening Room.

Answering these concerns will require some sophisticated research to understand the trade-offs for consumers, cinemas and studios and to calculate the dollars created and shifted

2. Is a $150 box for consumers viable in today’s world of $35 Google Chromecast devices and consumer box fatigue?

Also Read: What's So Great About Screening Room? The Inside Story of Sean Parker's Day and Date System

Many have tried to add new, expensive boxes to the consumer’s home; few have succeeded. Apple TV and Roku are notable exceptions. Selling boxes to consumers is tough. Even Netflix depends critically on PlayStation 4, Xbox One, Roku and others to make the service work. Cheap products like Chromecast and Roku Streaming Stick are what consumers are interested in buying now. But will they be willing to change?

3. Will studios want a new, profit-making entity over which they have no control that gets in between them, the cinemas and the consumers?

In the past, studios have strongly resisted establishing profit-making organizations between the studios and exhibition outlets. For example, when it became possible to ship films digitally direct to cinemas, some studios and exhibitors created a “cooperative” called DCDC, or the Digital Cinema Distribution Coalition, to make it happen. DCDC functions like a co-op, distributing profits back to the industry, and uses satellites to distribute movies to cinemas. It works well for all — studios, exhibitors and consumers. So given their history of developing “in-house” solutions, do studios and exhibitors want help from third parties, or will they want to create their own solution?

4. Is the industry gun-shy?

Clearly, the industry must do something creative to increase revenue and drive more consumers to films. The Screening Room could be exactly what the industry needs today, but the industry has been bruised by several new film ventures. Netflix initially generated some good fees for film studios, but Netflix’s shift to TV content has created strong competition for the traditional film ecosystem. Redbox, as a new venture, was initially supported by some studios, but Redbox’s prices were so low that consumers were unwilling to pay much more for a movie rental.

What type of new service is the Screening Room? The jury is still out on that question. For example, some executives are comparing it to what happened and is happening in music. Is the Screening Room something like Sonos, the service that makes premium, paid music consumption easier and better? Or is the Screening Room like the old Napster, which catastrophically lowered the amount of money that people were willing to spend for music?

Next week, we will discuss other potential saviors of the movie industry.

This is Part 5 in a series on box office trends by Dan Schechter, Gil Moran and Michael Kaufman from L.E.K. Consulting’s Media, Entertainment & Technology consulting practice.

12 Hollywood Heavyweights for and Against Sean Parker's Screening Room Proposal