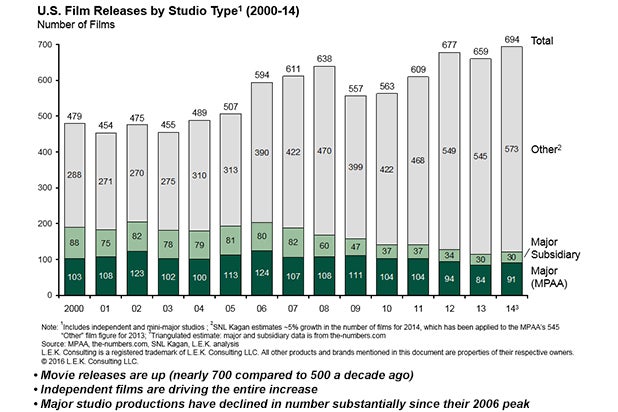 Last week, we talked about the remarkable historic resiliency of movie attendance and the potential impact home entertainment can have on the industry going forward. So what has Hollywood done recently to curtail some of this potential movement?

Nevertheless, movie studios are still spending money. So what are they spending it on?

The large Hollywood studios continue to shift budgets toward high-cost tentpole films. In the last 15 years, average production budgets have gone up more than 50 percent (or approximately 3 percent per year). Films with budgets greater than $100 million now account for more than 15 percent of films.

As large studios pour more money into tentpoles, they are pulling back on small-budget films (those with a budget of $5 million to $20 million) and pushing medium-sized films (budgets of $50 million to $100 million) into tentpole territory. 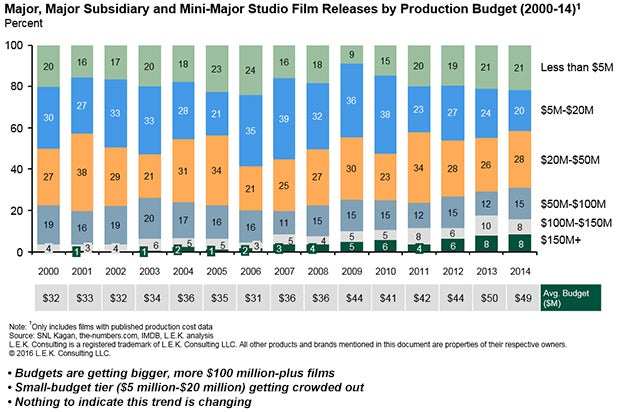 So how much money has actually shifted to big-budget films? Probably more than you think.

Total production spend by large Hollywood studios has increased by roughly 50 percent since 2000, reaching almost $9 billion in 2014. Nearly all of the growth has come from big-budget films, with $100 million-plus films adding more than $1 billion in total spend since 2010. 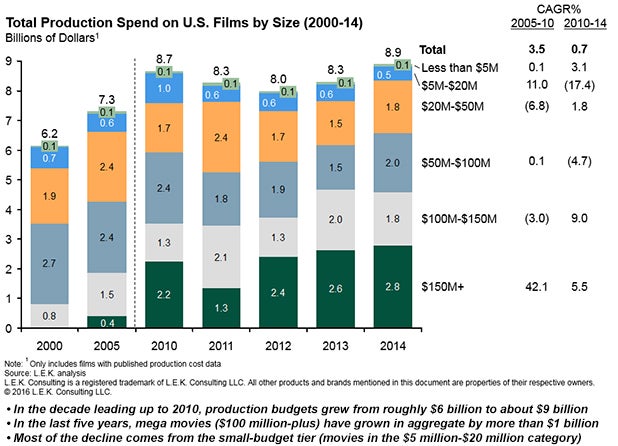 Studios are continuing to bank on consumers’ willingness to pay for big-budget films with scenery and visual effects that must be seen in the theater to be fully appreciated. This was the whole premise of the 3D revolution, which we will explore in next week’s post.

This is Part 2 in a series on box office trends by Dan Schechter, Gil Moran and Michael Kaufman from L.E.K. Consulting’s Media, Entertainment & Technology consulting practice.