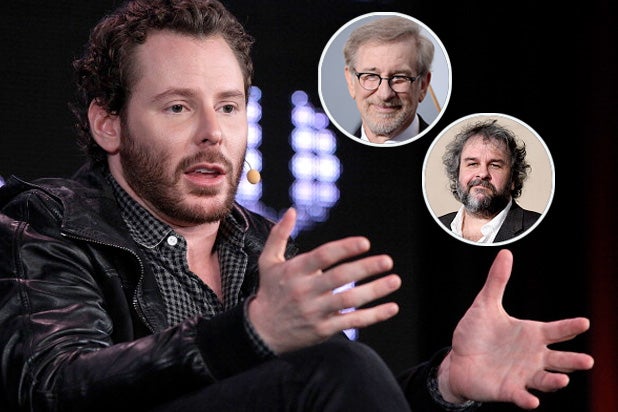 Everybody in the movie industry is up in arms about Sean Parker’s proposed new system to release movies in homes on the same day as in theaters.

Theatrical groups are lining up to condemn the system as unworkable, an invitation to piracy and a death knell for the theater-going experience. A-list directors including Steven Spielberg are lining up to say this is going to save the movies.

TheWrap spoke to one of the chief proponents of the system to get some basic answers as to how it would work, and why no one from Screening Room is talking publicly.

The first thing to know is that The Screening Room is not ready to be rolled out. Parker and his partner Prem Akkaraju are still working on it. Hence the lack of public comment.

But the fundamental basis for their bold approach to day and date is a recognition that one demographic that grew up going to the movies rarely goes anymore: 25- to 39-year-olds. So the question was: How to find a way to give them access to the movies they want to see on opening weekend?

“The price point we’re going for is to target people who are working adults, young adults who used to go to the movies, and now can’t because of kids or other obligations,” said this insider.

This is an incredibly large group, according to statistics gathered by the Motion Picture Association of America. Adults aged 25-39 have been declining as moviegoers since 2010, and constitute about 25 percent of the overall theater-going audience. (By contrast, the number of theatrical moviegoers over 50 keep going up and other groups are more or less stable.)

That mid-range group, Parker and Akkaraju surmised, would pay a significant sum — $50 — to see in their homes a movie that is opening that weekend at the cineplex.

But in order to cut exhibitors back into this system, the $50 fee will include two tickets to see the movie at the theater they choose at the time of purchase, and a kickback of $20 to the theater chain. The buy-in for this system is $150 for the set-top box.

“The idea is a good idea,” said the insider, who has signed on to The Screening Room, but could only speak on background. “We’re in the process of refining it, getting the terms correct. Hearing what everyone has to say, their concerns. There’s an idea here that cuts everybody in.”

The business model underpinning the movie industry is eroding, as everyone with a pulse ought to know. Home entertainment dollars have gone away, and VOD and streaming revenue is under constant competition from the original content now favored by Netflix and Amazon.

And yet marketing costs remain enormous. Opening a movie typically costs $20 million or more, whether the movie stays on screens for one week or four. Expanding the audience to the home on opening weekend allows movie studios to take advantage of this huge spend they are making on the theatrical experience.

“We’re trying to piggyback on theatrical,” said the insider. “The theatrical window has not evolved into the way that life is today. You’re spending a lot of marketing right away, and accessing a lot of revenue much later. So can we get the slice bigger immediately in response to the huge marketing spends that are going on — with movie stars travelling all over the world? Can we make the event bigger?”

That’s the idea. But the naysayers are legitimately concerned about piracy.

The Screening Room has proprietary technology, but plenty of skeptics - including the association of arthouse theaters — wonder what would stop anybody from pointing a camcorder at their flatscreen TV to pirate the movie as it comes out.

Said the insider: “A large part of the audience that should go is pirating the product now, which is a huge issue. A lot of surveys say they’d like a better quality experience but short of going to the theater — which they don’t want to do or can’t do because of lifestyle issues — they don’t have another option.”

So calm the hysteria, please. Let’s see if this idea can be made to work before strangling it in the crib. “This gets us off this treadmill of no change,” said the Screening Room insider.

And as for all those teenagers who used to go to the movies and are now staying home to play “Call of Duty”?

The person sighed. “Nothing can solve everything,” he said.

12 Hollywood Heavyweights for and Against Sean Parker's Screening Room Proposal