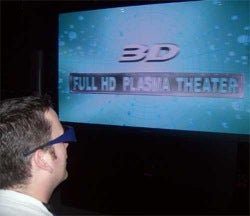 The latest to jump on the bandwagon, Sony has announced its line of 3D-capable Bravias are now available for order.

The new sets will hit retail shelves in the United States beginning this July. In advance of their domestic launch, Sony 3D TVs go on sale in Japan this month.

In anticipation of the new sets, Sony will release its first 3D Blu-ray, "Cloudy With a Chance of Meatballs," on June 22. And as a boon for early adapters, Sony will throw in a free copy of the animated movie as well as the documentary "Deep Sea" along with the purchase of new sets.

Competitors such as Panasonic, LG, and Samsung already have their own 3D sets on the market

It may be later to the party than other technology companies, but Sony is bullish on the prospect that audiences will warm to throwing on the colored spectacles when sitting in front of the tube.

It has previously estimated that 10 percent of its TV sales ending in March 2011 will be from 3D sets.

The company also is hyping PlayStation games for its 3D-compatible consoles, offering vouchers for games such as WipEout HD and Super StarDust with the purchase of 3D televisions.

Top of the line, 60-inch sets come equipped with two pairs of 3D glasses, but the other sets are all sans specs. Sony’s 3D glasses cost $150.

The news came on the same day that ESPN announced that AT&T U-verse TV customers will be able to see World Cup matches in three dimensions with launch of the network’s 3D channel on June 11. It had previously announced a deal with Comcast.