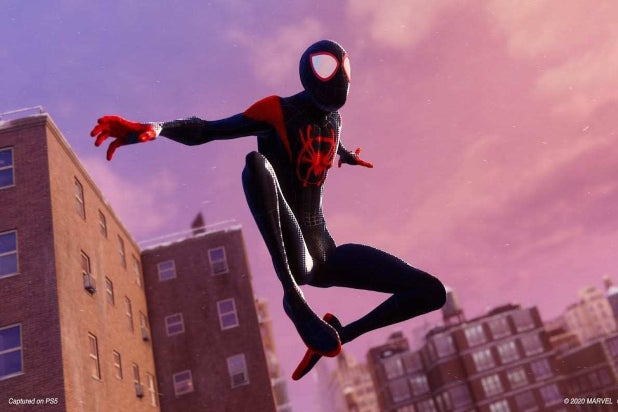 Players who pre-order the upcoming “Marvel’s Spider-Man: Miles Morales” video game for PlayStation will get a stylish, interactive new suit to swing around the city in.

Modeled after the original “Into the Spider-Verse” suit that Miles Morales designs for himself, the spidey-suit is animated with the same stop-motion comic book effects the film became known for. When players wear the suit and attack enemies as Miles, they’ll prompt comic-style exclamations to show up in combat.

The “Spider-Verse” suit is the latest innovation teased by Marvel to pique fans’ interest in the upcoming games — earlier in the month, Marvel showed a couple of combat sequences and cutscenes featuring Spider-Man the Cat, a trusty bodega cat that Miles rescues to become his sidekick.

Marvel will release “Marvel’s Spider-Man: Miles Morales” Nov. 12. The game is a launch title for the next-generation PlayStation 5 — which goes on sale the same day in the U.S. (and Nov. 19 in other parts of the globe). Sony also announced the game will be available to play on its most current console, the PS4.

Disc drive-enabled versions of the PS5 will retail for $500, while an all digital version costs $399 and will require players to digitally download or stream their gaming library.

Check out the full video of the new suit in action below.