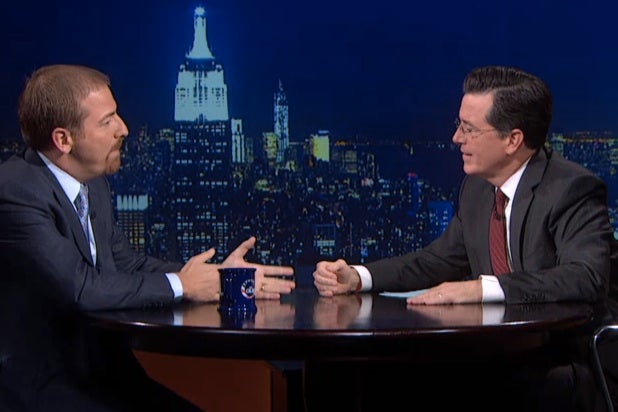 Chuck Todd told Stephen Colbert there’s a good chance Tuesday’s midterm election results will be so close, the process could extend into January.

“These midterms are so exciting, I know you love them so much, that not only can we have recounts…”Todd said Monday night, enthusiastically adding how exciting it is that close races could linger on for a few months.

“Chuck, if I have to keep talking about the midterms after tomorrow night, I’m going to go to Maine and start making out with that nurse,” Colbert responded. He’s of course referring to nurse Kaci Hickox, who sparked a media firestorm refused to stay quarantined in her Maine home after traveling to West Africa recently. She never showed symptoms of Ebola, so Colbert has nothing to fear if he tries to make a move on her.

And the two also compared bodily discomfort. “You got the six-year itch?” Todd asked. “”I got a 6-year swamp ass,” Colbert responded.