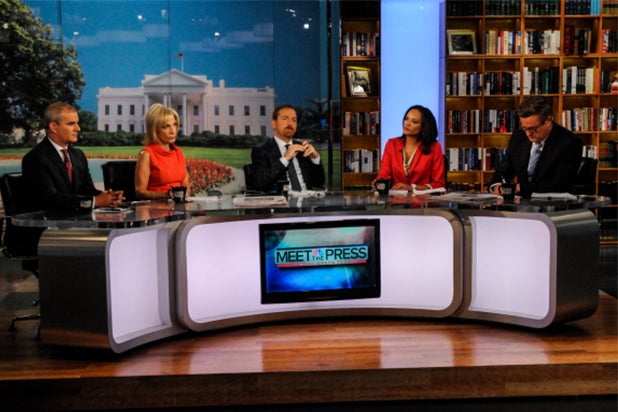 In TV news, you play to win. But NBC News executives are smiling for reaching second place Thursday as “Meet the Press” snapped out of its ratings funk.

Chuck Todd’s show finished second in total viewers and in the coveted 25-54 demo, trailing only CBS’s “Face the Nation” in viewers and ABC’s “This Week” in the demo on Sunday, Oct. 19th.

This was the first week “Meet” — with Todd as moderator — has finished above third place in both measurements aside from his debut on Sept. 7, when he won in total viewers and the demo thanks to an exclusive interview with President Obama.

Also read:  Chuck Todd’s ‘Meet the Press’ Ratings Fall Back Down to Earth in Week 2

One of the more encouraging nuggets from the ratings is the demo number, as Todd narrowly missed being the top program by 9,000 viewers.

There’s been a weight of ratings pressure on Todd from the outside media world since he took over the coveted moderator chair from David Gregory. For his part, he’s changed quite a bit about the show in just six weeks on air (one of those weeks saw “Meet” pre-empted for sports). In addition to a new set, Todd has made the press more than just a title.

Since his debut, he has surrounded himself with journalists beside just the beginning of the show, keeping them throughout to both set the table for his one-on-one interviews and react to them. He’s also challenged guests more than his predecessor: in his debut interview with the president, he all but confronted him on whether he was punting on immigration reform for the sake of politics.

One week doesn’t make a trend, but it will be interesting to see if Todd can build on the momentum this Sunday — over a week before the midterm elections.