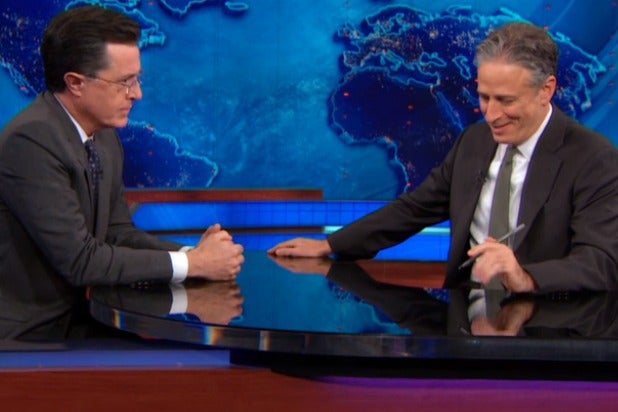 If you need some laughs the night of the midterm elections, Comedy Central has you covered.

The network announced Tuesday that Jon Stewart and Stephen Colbert will be live in consecutive special episodes covering the midterm elections. Stewart will start with “Democalypse 2014: America Remembers It Forgot to Vote” at 11 p.m.

At 11:30 p.m., Colbert will follow with “Midterms ‘014: Detour to Gridlock: An Exciting Thing That I Am Totally Interest In — Wait! Don’t Change The Channel. Look At This Video Of A Duckling Following A Cat Dressed Like A Shark Riding A Roomba! ‘014!”

Republican National Committee Chairman Reince Priebus will be a guest on Stewart’s special. Colbert will have Andrew Sullivan of The Daily Dish. Fans will be able to live-stream both specials on CC.com and the Comedy Central App.

For Colbert, it will be the last election he participates in at Comedy Central; he’ll replace David Letterman as host of the “Late Show” next year.