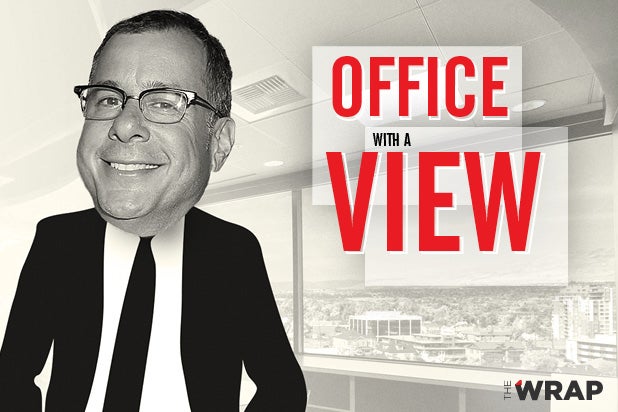 Comedy Central has somewhat quietly become simultaneously hipper and more mainstream at the same time — and much of that credit is due to Kent Alterman, president of content development and original programming.

That said, the man in the decision-maker’s office wouldn’t have pegged himself for the all-important role.

“I’m a total reflection of someone who never had a career plan,” Alterman admitted to TheWrap in the latest installment of our “Office With a View” executive Q&A series.

Also read: Office With a View: Amazon’s Comedy Chief Reveals the One Question That Will End a Pitch Meeting for Him

Well, he’s got a plan now — a good one. With Alterman in the driver’s seat, Comedy Central boasts twice the original content than it had at any point in its history, including more stand-up and scripted shows.

But Alterman wasn’t always a bigwig at a major cable channel, of course, and his story is as winding as anyone’s. The former graphic design professional first picked up writing and producing credits here and there, eventually parlaying a gig on a Michael Moore show into developing and executive producing the “Upright Citizens Brigade” sketch comedy show and “Strangers With Candy” for the early version of his current employer. After moving up that ladder, Alterman left TV for New Line Cinema, where he counted “Elf” amount his executive producing credits. Soon he was wooed back to the small screen and Comedy Central.

Being one of the kings of comedy content in TV’s “content is king” era is thanks in part to the roster of seemingly endless talent that Comedy Central has cultivated. Alterman’s next-man-up (or woman-up) replenishment strategy is somewhat simple, but works: First, find the talent — funny yes, but more importantly those with a strong point of view. And then figure out the best genre or format to place his prospect in.

That two-part strategy cannot favor one step over the other. Case in point: Anthony Jeselnik. Few people have a stronger comedic point of view than the dark stand-up, but his show’s format choices didn’t suit the talent.

“When we were first started developing , we were developing it with an eye for it to be a late-night strip show,” Alterman said. “At a certain point … we realized that it was going to serve us better to have a weekly primetime show.”

“[Jeselnik] was sort of a victim of that pivot midstream,” he admitted.

The stand-up/sketch/panel show was cut after two seasons, after the channel found that it had “a very finite, specific audience,” per Alterman.

Of course, Alterman doesn’t just hand out shows — not even to his most talented, er, talent. The developmental pipeline for Alterman’s stand-up comics, like Jeselnik, starts with five-minute appearances or sets on a Comedy Central panel show or stand-up series. Those who do well in that audition graduate to a half-hour special, which for a lucky few is followed by an hour-long special.

Ultimately, the ones who shine all the way through the process get to develop their own shows. Some of those traditional success stories also include Daniel Tosh, Nick Kroll and Natasha Leggero, to name just a few.

Also read: How ‘Silicon Valley’ and Nerdist Stars Brought Their Stand-Up Show From a Comic Shop to Comedy Central

Though even with a plan in place, sometimes the transition from stage to sitcom is not as clear a path as intended — but that doesn’t mean it can’t still work out.

Amy Schumer, who also just happens to be Jeselnik’s on-again/off-again beau, is an interesting case that somewhat broke Alterman’s seemingly simplistic mold. Before she was one of his biggest stars, the comedian had a tough time even getting on the bill for 2011’s “Comedy Central Roast of Charlie Sheen.”

Before the bashing telecast, Sheen and his managers were wary of including the virtually unknown Schumer, Alterman recalled. By the end of the night — after she killed — Sheen and his reps asked Schumer to join what would eventually become FX’s “Anger Management.”

Instead, Schumer stuck around at the cable channel that believed in her, scoring her own show, “Inside Amy Schumer,” which at one point was intended to be a Sunday night “hybrid-y talk show,” according to Alterman.

Given that the show has since been nominated for a writing Emmy and is headed into its third season, it was probably a good thing they switched to the variety/sketch route.

Alterman’s batting average of successes versus failures is as good as anyone’s. One recent hit is the Chris Hardwick-hosted late night show, “@midnight.” Yet again, the final product there was not the original.

“We knew we wanted to do something in a late-night show that didn’t exist and really used social media in an intrinsic way, and not as an add-on or an afterthought,” Alterman said.

The resulting show that is on now (and clogging your Twitter feed while it airs) is a marriage of two pilots the cable channel was developing: one was called “Hardwired” — which was set to be hosted by the Nerdist founder — the other was a faux gameshow, tentatively titled “Tweeter Dome.”

Alterman said he thought “@midnight” would be a “slower build” than it turned out to be, but he’s been pleasantly surprised by its cultural impact.

Of course, they can’t all be winners. As for that best failed show on the network, Alterman told TheWrap that it was 2011’s short-lived “Jon Benjamin Has a Van.”

“It was really unique and really funny and we didn’t quite figure it out,” Alterman recalled of the one-season run. “We were working our way there. We didn’t have enough to go on to get to that second season.”

That giving-up-early attitude is something that Alterman has tried to change at his channel, and with a stable of new programming coming up, they may need that patience.

Or hopefully not, really. Alterman has high hopes for four of his upcoming projects: “Big Time in Hollywood, FL,” “Another Period,” “Moonbeam City” and “Idiotsitter,” he specified.

But of course, the most important new show will be the one replacing one of Comedy Central’s best talents ever: Stephen Colbert and his “Colbert Report” are walking away at the end of the year. Replacing the show will be Wilmore’s “Minority Report,” which is just beginning to take shape.

“We’re still in the formative stages because Larry was launching ‘Black-ish’ (on ABC),” Alterman explained. “He just recently became free, so he and Rory Albanese and Jon [Stewart] are just sort of digging in. We’ve had a lot of sort of conceptual conversations, now they’re really hashing through it and [are in] the beginnings of the really deep dive into creating it right now.”

On the importance of making it stand out from his other news satire show — a little project called “The Daily Show” that spawned both Colbert and Wilmore, Alterman said, “ has a different sort-of underdog, underrepresented point-of-view that you don’t see out in the landscape.”

He continued, “I think that once it starts to coalesce, everything about it will be different and hopefully faithful to what the vision is for the show. That could be everything from the look and the feel of it to the format.”

“It will be its own thing,” Alterman promised.