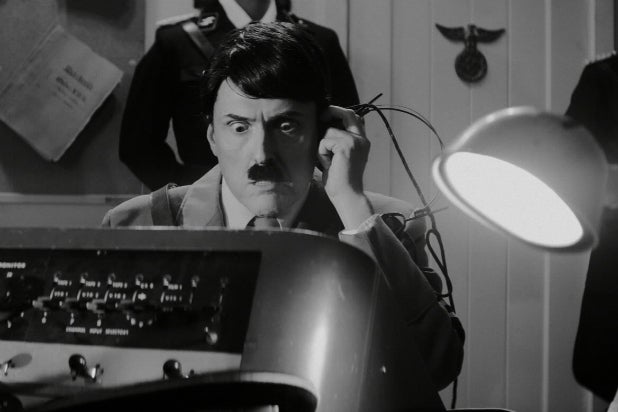 Sometimes you just want to get drunk and talk history with your friends — or at least Derek Waters does. In anticipation of Tuesday night’s Season 2 premiere on Comedy Central, the actor and co-creator of “Drunk History” spoke about the, err, history of his boozy-spoof show with TheWrap.

Waters recalled the wasted night he shared with “New Girl” actor Jake Johnson, telling tall tales about Otis Redding and unintentionally kicking off what would become one of the most popular underground comedy shows among celebrities. He also praised the Michael Cera effect and shouted-out Jack Black for giving his silly idea some official comedy credibility.

Also, Waters promised that during taping everyone is legitimately drunk, though you may be surprised by the serious measures these comedians take in the name of safety. And the fact-checking process is equally as professional. Finally, David Wain drinks dirty martinis, in case you were wondering.

TheWrap: How did the idea for “Drunk History” come about, and then how did the show actually happen? It seems like the unlikeliest of shows.
Derek Waters: It is the unlikeliest of shows, you are correct. It all started in 2007 over a night of drinking, go figure, with me and a friend of mine named Jake Johnson who’s an actor on “New Girl” — he plays Nick. We were having some drinks and just talking some stories, and Jake had this story about Otis Redding that, you know, should’ve taken about three minutes to tell, but it took about 45 minutes. He was so passionate about it, and I didn’t believe the story was even true, so I just kept picturing Otis Redding looking at Jake being like, “Shut the fuck up, man, that never happened.”

I was doing a live show at the Upright Citizens Brigade in Los Angeles, and just made this video where — I had the idea for a while, and Michael Cera, who’s my dear friend, was like, “If you ever do that idea I’d love to be in it,” and so I thought, “I should do it, I should do it.”

Also read: Here Is Megan Mullally Getting Drunk and a Cake Being Decimated (Exclusive Video)

So [with] my friend Mark Gagliardi — who’s very smart and also likes to drink — [we developed] my classic “Drunk History” question to narrators: What is a moment of history that you loved that you feel more people need to know about? And he said: “I just saw this documentary on Alexander Hamilton and Aaron Burr.” And I said to him, “So would you mind getting drunk and me … coming over and filming you?” And he’s like, “No that’d be a lot of fun.” It was really just a one-time deal, I’m a comic snob and it’s a five minute idea, I think it’s funny.

I didn’t even wanna put it online — I wanted it to be this underground DVD. I sent it to “Conan” and I sent it to “Saturday Night Live” in hopes that maybe this could be a monthly sketch, you know? And nothing happened until we put it on the Internet and Jack Black followed it and said, “I wanna be in that.” When you find out that Jack Black wants to do your idea, you don’t say no. Yeah, Jack Black is definitely the reason why it kept going on the web.  And then years went by and we did two for HBO, and one was with Will Ferrell, Don Cheadle and Zooey Deschanel. That one won us the 2010 Jury Prize at Sundance for Best American Short Film which is still insane to me, that that’s the best short film America did that year. Then people would approach me about, like, what about a movie?  It’ll get old, it’ll get old, it’ll get old.

Anyway, so it was like, what’s a way to make the same idea, but each episode has something different to it? So the city is sort of the through line, all three stories will have something to do with the city, and they can be in different genres. I just didn’t want it to be white, powdered wigs in every story, you know, like, “Oh this English person and a drunk guy are talking and they’re moving their lips.” What I think helps the show is the stories that we find that are real. Even though the people are drunk, all the facts are true — the dates are true, the events are true.  I’d say the comedy is the drunk narrator, but in reality, it’s a history show.

Do you employ fact-checkers for that purpose?
Oh yeah, researchers. We try to get at least three to four sources to make sure the stories we find are true. I always stray away from things that are too political, cause I come from the background of … I love documentaries and I don’t want to make anything that tells you what you should believe in. I like going, “This is what happens, however you want to interpret it, that’s your choice as the individual.”

How drunk, on a scale of 1-10?
You know, it depends. As you know, people have different tolerances, and we have a medic on site so we’re constantly making sure they don’t go above a certain level of alcohol. We have a breathalyzer, which really makes things funny. Safety is first, they’re always at their homes, they’re protected. I would say they’re at a 10, but they’re at a safe 10, know what I mean?

I learned a lot about what alcohol does to you and no matter what, when you first start drinking, you’re the funniest person in the world. But my warning to anyone that is out drinking, if you’re drinking and the person or people you’re with go: “You’ve already told me that,” that’s when you stop drinking.  That’s Phase 2. As soon as the repeating starts, you are drunk, and stop because the next stage is: “I hate myself and I don’t know why you guys even chose to film me, this is terrible.”

And every single narrator, no matter who it was last year and this year, every morning I get an apology email saying, “I’m sorry I didn’t tell the story.” So that tells you what alcohol does. My job is not to glorify alcohol, my job is to make people laugh and learn.  The stage that it works best in for our show is just Stage 2 with a hint of 3.

Who of the narrators drank the weirdest booze?
David Wain had a dirty martini, which surprised me.

Hm, yeah I wouldn’t peg him for a dirty martini kind of guy.
Yeah me neither. He was the only one where I was like, “Oh, that’s interesting.”

Did anybody pass out or anybody take longer to shoot than anybody else?
Yeah, but I don’t wanna make anyone look bad.

What are some of your favorite episodes this season?
Well “Baltimore,” because I directed it and it’s where I’m from, but the premiere I loved. It has one of my all-time favorite stories that we’ve ever done, about a girl named Claudette Colvin who did exactly what Rosa Parks did months before Rosa Parks. But Claudette Colvin was a fifteen-year-old girl who was pregnant, and the NAACP didn’t think she’d be a good role model, so it’s not like, “Oh let’s forget about Rosa Parks.” God bless Rosa Parks. This was a decision that was very well-calculated, but let’s also remember where it came from — the heart of this young girl that refused to move out of the white section of the bus and started … well, the movement started after Rosa Parks. But the idea came from this young fifteen-year-old girl — and she’s still alive.

Do you have any buddies that are teachers, or have you heard of any stories of people using this to educate people who are bored with traditional history teaching?
I’ve like read on Facebook: “My history teacher showed us this.” I’ve also read: “My history teacher got fired for showing us this.” I mean, look. I think college, a high schooler … I don’t think you should be hearing those words even though you use them. There’s a lot of that language, but I will say something I’m really proud of: Hitler [played by “Weird” Al Yankovic] is in our premiere episode. It’s not about Hitler, he’s just in it — and he does not swear. The worst phrase Hitler says is, “Uh-oh, Spaghetti-os.”

Have you been pitched, or are you working on anything that’s like, ‘Drunk ____,’ ‘Drunk Science,’ any of that stuff?
Nope! Alcohol is a certain substance that makes this work because it gives you confidence, and makes you feel like you are the smartest person in the world. And not that these people aren’t, it just helps with the premise of the show. And it’s relatable. You don’t wanna see someone stoned, talking about, like, the stars in the sky. You know how long that show will be?