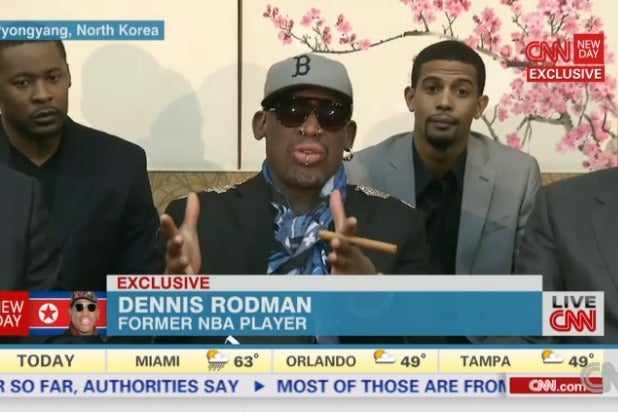 Dennis Rodman apologized Thursday for implying that an American missionary’s imprisonment in North Korea was justified, blaming his comments to CNN about the international on a combination of stress and booze.

A spokesman for the Basketball Hall of Famer did not immediately respond to TheWrap‘s request for comment, but in a statement to the Associated Press, Rodman said he took “responsibility for my actions” and said he was sorry that his recent visit to the country had not led to an easing of tensions with the United States.

“It had been a very stressful day,” Rodman said. “Some of my teammates were leaving because of pressure from their families and business associates. My dreams of basketball diplomacy was quickly falling apart. I had been drinking. It’s not an excuse but by the time the interview happened I was upset. I was overwhelmed. It’s not an excuse, it’s just the truth.”

Rodman has been visiting North Korea as the guest of Kim Jong Un, where he helped organize an exhibition game in the country with former professional basketball players. He has labeled Kim, a despotic ruler who recently ordered the execution of his uncle, his “best friend.”

North Korea is known for its political suppression and extreme poverty, but Rodman got into hot water during an interview with CNN’s Chris Cuomo. After the host asked Rodman if he would use his influence to encourage Kim to release U.S. missionary Kenneth Bae, whose health is failing and who has been imprisoned without charges, the basketball star lost his temper.

Rodman’s comments have been condemned by Bae’s own family and by U.S. Senator John McCain, who called the player, “an idiot.”