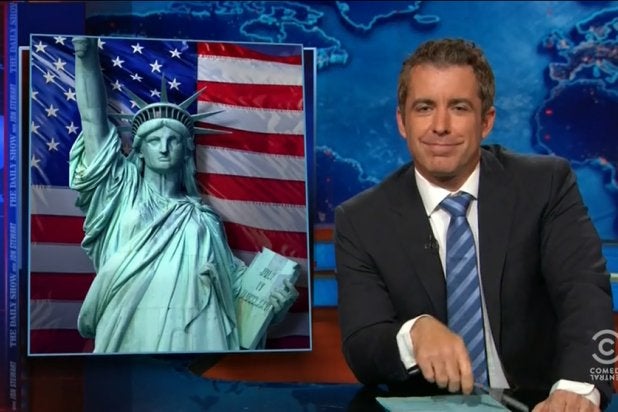 The last time Stewart stepped away from the desk for any period of time, it was to direct his Nov. 7 feature film, “Rosewater.” John Oliver stepped in for the summer of 2013, and the fill-in gig landed him his own HBO show, “Last Week Tonight With John Oliver.”

Jones has been with “The Daily Show” since 2005, but this was his first time behind the desk. He hinted at his position on the show while doing a story about the Vice President Joe Biden.

“Beings second in command is a bitchy f—ing job,” he said. “Never getting to sit in the captain’s chair. Waiting for something to happen to the boss’ health before you get your chance to do anything. And you know you’re ready. That has got to be — I would imagine — incredibly frustrating.”

But Jones wasn’t the only one feeling ready to take command. His wife Samantha Bee, who preceded him on “The Daily Show” by two years and is the longest-ever correspondent in the show’s history, joined him first as a special guest before forcing her way behind the desk.

It became a “Daily Show” reunion special with Jones and Bee together welcoming the night’s guest, comedian and former correspondent Wyatt Cenac.

There is no indication as to when Stewart might return, so it’s easy to imagine other networks watching Jones carefully, should he continue beyond Tuesday night’s show, to see how he performs.

“Last Week Tonight” has become a hit for HBO, amassing critical acclaim and social media buzz, while many other “Daily Show” correspondents have gone on to successful careers, like Steve Carell, Ed Helms, Stephen Colbert, Olivia Munn and Michael Che.

“The Daily Show with Jon Stewart” airs Monday through Thursday at 11 p.m. ET on Comedy Central.