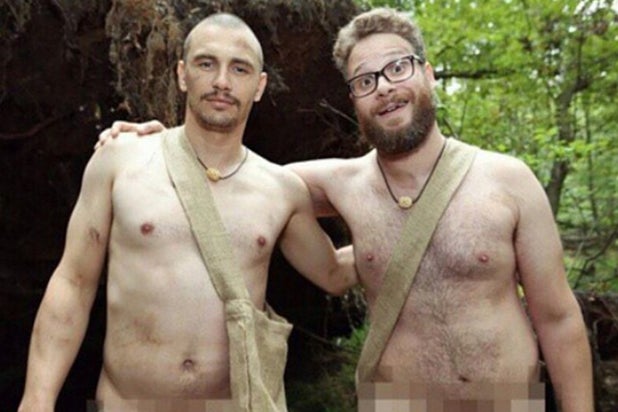 James Franco and Seth Rogen have outdone themselves again.

The co-stars of “The Interview” ventured naked into the wilderness Friday, and documented their completely clothes-free romp on social media.

The madness started early on when Franco posted a picture of he and his longtime pal peeking out from under a tarp, buck naked and caked in dirt.

“See if me and Seth can make it,” Franco’s Instagram caption read. “Naked and afraid!”

Hours later, Franco posted a picture of the two of them embracing in the woods wearing nothing but burlap sacks and hippie choker necklaces. Their crotches were blurred out.

Franco posted another picture Saturday morning, which is difficult to describe except to say the two of them were naked, their arms up in the air, and they were staring directly at each other’s man parts.

This isn’t Rogen and Franco’s first nude, man-on-man social media adventure. Last November they spoofed the Kanye West music video “Bound 2” in a parody that saw Rogen get naked on a motorcycle Franco was driving.

The highly-trafficked video was shot while they were on-set for “The Interview,” which opens Christmas Day.

See Franco and Rogen’s “Naked and Afraid” photos below: