Two great pieces of news from the Upside Down: “Stranger Things” has been renewed for a fourth season at Netflix and the streaming service has signed the sci-fi series’ creators and showrunners, Matt and Ross Duffer a.k.a. The Duffer Brothers, to a multi-year film and series overall deal.

And to accompany this announcement, Netflix dropped an announcement video that hints “Stranger Things 4” won’t take place in the fictional Hawkins, Indiana, following the “Stranger Things 3” finale’s major post-credits scene cliffhanger. Watch the clip above to see what we’re talking about here.

The financial terms of the Duffers’ overall deal with Netflix were not disclosed.

“The Duffer Brothers have captivated viewers around the world with ‘Stranger Things’ and we’re thrilled to expand our relationship with them to bring their vivid imaginations to other film and series projects our members will love,” Netflix’s Chief Content Officer Ted Sarandos said in a statement Monday. “We can’t wait to see what The Duffer Brothers have in store when they step outside the world of The Upside Down.”

“We are absolutely thrilled to continue our relationship with Netflix,” the Duffers added. “Ted Sarandos, Cindy Holland, Brian Wright, and Matt Thunell took a huge chance on us and our show — and forever changed our lives. From our first pitch meeting to the release of Stranger Things 3, the entire team at Netflix has been nothing short of sensational, providing us with the kind of support, guidance, and creative freedom we always dreamed about. We can’t wait to tell many more stories together — beginning, of course, with a return trip to Hawkins!” 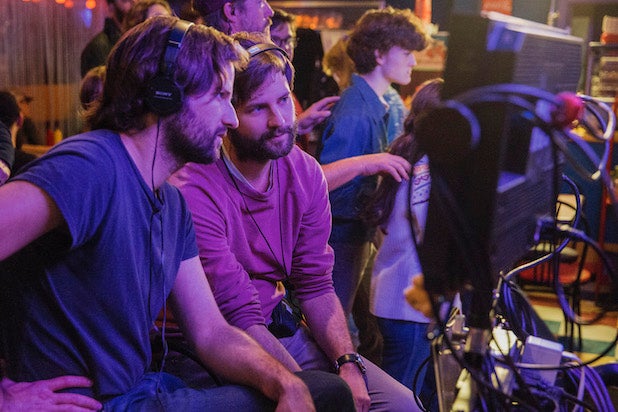 The twin brothers were raised in Durham, North Carolina and began making films in the third grade using the Hi8 camcorder they received as a gift from their parents. They went on to attend Chapman University’s Dodge College of Film and Media Arts, graduating in 2007 with degrees in film production.

After graduating, the Duffer Brothers wrote and directed several short films, attracting the attention of both Warner Bros., which acquired their script for the post-apocalyptic horror film Hidden, and filmmaker M. Night Shyamalan, who hired them as writers for multiple episodes of the Fox series Wayward Pines.

Building on their growing success, the Duffer Brothers pitched their idea for Stranger Things, an homage to 1980s genre films. The series was picked up by Netflix and premiered in the summer of 2016 to critical-acclaim and went on to become a global phenomenon, with Matt and Ross at the helm as writers, directors and showrunners.

Stranger Things has garnered over 50 awards nominations, including those from the Emmys, the Golden Globes, the Grammys, SAG, DGA, WGA, BAFTA, the Art Directors Guild and the People’s Choice Awards, among many others.

The Duffers are repped by Alex Kohner of Morris Yorn Barnes Levine Krintzman Rubenstein Kohner & Gellman, and repped as directors by CAA.