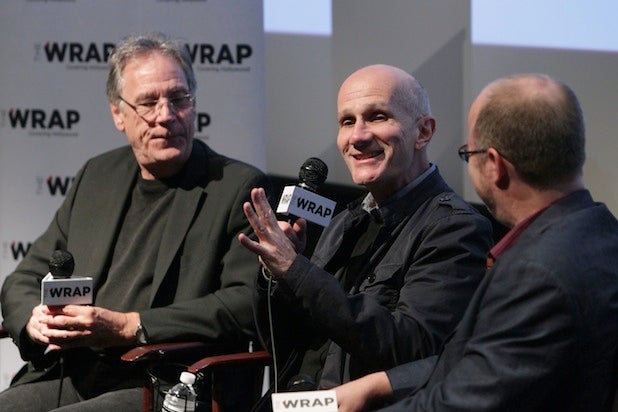 Making a movie about one of the most iconic films in American history was challenge enough. Visually recreating the golden age of Walt Disney, which is documented in minute detail in books, documentaries, and online for all to compare, was a challenge “Saving Mr. Banks” production designer Michael Corenblith and costume designer Daniel Orlandi met head on.

“We feel a responsibility to the person whose story it is to know as much about them as possible, whether we use it or not, just to be as truthful as possible,” Orlandi added.

Fortunately, Orlandi and Corenblith had a wealth of resources from which to draw reference to build sets and design clothing to be as accurately as possible.

“Daniel and I, we’ve done a lot of these things and we’re accustomed to having relatively deep archives, but nothing like this in our past,” Corenblith said.

Dozens of Disney fan websites host candid home movies and personal photographs of Disneyland, archived by year. With literally thousands of views and angles to consult, the designers had a reliable roadmap to begin building the visual story of “Saving Mr. Banks.”

Of course, Disneyland is a 24-hour operation, so the production had just two days during the lull of election 2012 to film the movie’s scenes at the park. Coincidentally, Corenblith told the audience, that brief two-day window was also the time between Halloween and Christmas decorations at Disneyland.

As far as the Disney lot, the production took a bit of artistic license with the rooms used for filming, but Walt’s iconic office – where he introduced the weekly “Walt Disney Presents” televisions series – needed to be pitch-perfect. Corenblith even got to use Disney’s actual Oscar statuettes for the production — though they went back into the vault every night after filming.

On the lot, details as specific as maturity of trees dictated where shots could be set up.

“Pan the camera an inch this way or that way, and you’re into anachronism,” Corenblith said director John Lee Hancock would tell his crew every day.

On the actors, details as specific as tie pins made the difference in character transformation. Orlandi said that Tom Hanks, who plays Disney, was given a tie clip with a train on it because Disney was a train enthusiast. The character — as did the man — also wears a tie pin from the Smoke Tree Ranch in Palm Springs, one of Disney’s favorite respites. The film makes no mention of the ranch nor offers explanation of the pin, but its presence lends the deep authenticity to the character Orlandi sought.

So who was the most difficult actor in the dressing room?

“Mickey Mouse in 1961 looked so different than Mickey Mouse now,” Orlandi said. “There are a lot of people that come in and have to approve you every step of the way.

“We spent more time fitting him than we did Emma!”