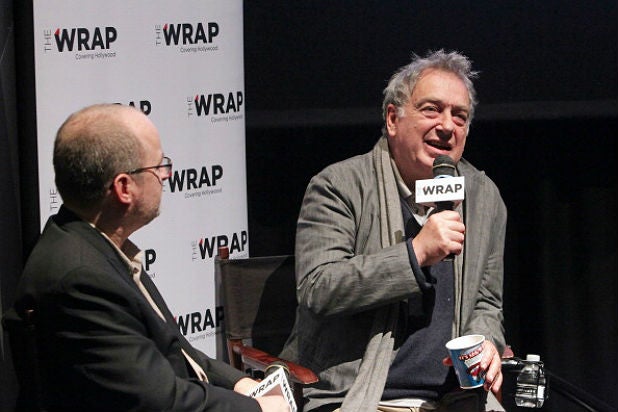 Stephen Frears dropped by TheWrap’s Awards Screening Series Wednesday night to discuss his film “Philomena,” which stars Judi Dench as a woman who teams up with a journalist (Steve Coogan) to find the child she was forced to give up for adoption 50 years earlier.

“There was a script I guess they worked on for nine months and then I said I’d do it,” said Frears, who leapt at the chance to work with Judi Dench again after successful collaborations on “The Queen” and “Mrs. Henderson Presents.”

“There was tragedy and comedy going on at the same time. It was the double thing that I really liked and thought was very, very clever,” said Frears, who thought the script was “very well-written.”

“There used to be a sequence where Judi and Steve had to sleep in the same bed, which seemed to be a perfect idea for a scene, but “someone” cut it,” joked Frears, though it’s unclear whether he was referring to TWC’s Harvey Weinstein, who has a reputation for involving himself in the editing process, or someone else entirely.

The film is based on the true story of Philomena Lee, and Frears said the subject of his film wasn’t quite what he had in mind prior to meeting her.

Also read: Why Steve Coogan Told ‘Philomena’ Director Stephen Frears to Keep an Eye on Him

“What was really striking when I actually met Philomena was her complete lack of bitterness. She gave no impression that she had this tragic early life. She wore it so lightly and was so dignified. She wasn’t like a woman who was nursing some bitter secret,” the director said, sounding impressed.

Frears had only one actress in mind for the challenging title role — Oscar winner Dench, whose first time working with the director was more than 30 years ago.

“I think we both realized we’d worked with each other more than anybody else. Somebody’s gotta look after her,” joked Frears, who added that the only thing that has changed between them is that “we both sit in wheelchairs now!”

One of the undercurrents of the story that has received plenty of attention from the media is the film’s view of Catholicism, as a group of nuns force Philomena to give her baby up for adoption and then refuse to help reunite them when her son comes looking for her years later.

“When I discovered Steve Coogan‘s lapsed catholicism, I thought that was really interesting. I can’t even remember if that was in the first draft but it developed.” That led to a brief discussion about religion, which ended with Frears throwing up his arms in mock-frustration and telling TheWrap’s awards editor Steve Pond “don’t ask me questions about Catholicism!”

Frears told the sold-out crowd that Coogan was particularly concerned about his own tendency to go too broadly comic with his performance. Frears actually liked the wit and humor that Coogan brought to the rather sad story, though at one point, Frears’ cameraman suggested the director rein Coogan in because the actor was moving his eyebrows up and down too much.

Just one day earlier, Frears wrapped his untitled Lance Armstrong movie that stars Ben Foster as the scandal-plagued cyclist. He said “it stretches the limits of forgiveness.

The British director also addressed his brief involvement with the biopic of Queen frontman Freddie Mercury.

“I met with Sacha Baron Cohen and he said I’ll see you in two weeks and I’m still waiting. Then I read that he fell out with Brian May, which is the question I’d always had. Sacha wanted to make an outrageous film which I didn’t think is what Brian May wanted, but I’m very gossipy.”