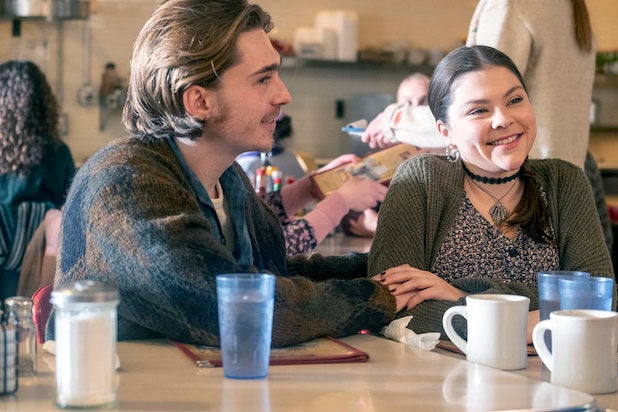 (Warning: This post contains spoilers for Tuesday’s “This Is Us”)

It’s been a hell of a few weeks for “This Is Us” fans. The NBC family drama’s “Big Three” trilogy came to an end Tuesday with an episode focused on Kate in three timelines: the present (played by Chrissy Metz), her teen years (Hannah Zeile) and her preschool days (Isabella Rose Landau).

And though present-day Kate certainly has it rough with her marital problems with Toby and caring for her blind, infant son — the Kate we’re most worried about right now is the one who is being verbally abused by her boyfriend Marc (Austin Abrams) in the late ’90s. “This Is Us” fans have been waiting to see the mysterious conclusion to this increasingly dysfunctional relationship since it was first introduced at the beginning of the season — and they’ll have to wait just a bit longer.

Tonight’s episode, “A Hell of a Week: Part Three,” ended with Kate and Marc arriving at her family’s cabin in the woods, having reconciled after he abandoned her on the side of the road and called her fat because she wouldn’t agree to quit working at the record store just because he had.

Also Read: 'This Is Us': Justin Hartley Teases Moment That Will 'Forever' Change Kate-Rebecca Relationship, What's Up With Marc

“I think that the writers have dropped a couple subtle hints that Marc is a bit controlling, like with the comments when she wants to go to the movies and he says, ‘That movie is for babies’ and she just kind of gets quiet,” Zeile told TheWrap. “So there have been subtle hints, but tonight it’s definitely apparent that Marc is verbally abusive to her. And these last few episodes have been feeding into the big peak of it all, which I can’t really say much about. But I can say it’s all going to be rewarding. Everyone has been teased all season, so I think everyone is gonna get the answers that they needed.”

Zeile says the trauma that Kate is going through with Marc ends up tying into her current marital problems with Toby, which are deeply explored when Kate confides in her mother, Rebecca (Mandy Moore), during this episode as the two go on a retreat for families with blind children.

“I definitely think that when you’re being verbally abused and put down and not supported properly, like in this episode when Marc calls her a ‘fat face,’ I think a lot of the time people think that it’s because of their own doing, you know?” Zeile said. “They think, ‘Maybe if I was thinner and I was in better shape or I was prettier, he wouldn’t treat me like this.’ But it’s not true, it’s really their own issue. And I think that insecurity– Kate always had self-doubt and always had insecurity and I think that Marc definitely fostered them. And now we can kind of see in her marriage the insecurity that she’s having now that Toby is getting into shape, and he’s in a CrossFit group and he’s texting another woman, you can see her kind of starting to spiral in her head and feel probably similar feelings to what she felt in her first relationship.”

Zeile thinks the episode is a “really important” one for “This Is Us” fans, not just in terms of story — but because of its message.

“A lot of times when you’re in a verbally abusive or toxic relationship, you take on a lot of the shame yourself,” she said. “And you don’t want to open up to the people you’re closest to because you’re protecting that person, even though they’re not treating you right. So, I feel like hopefully, first of all, that this will be somewhat therapeutic for someone who went through a toxic relationship like this one.”

As for where things go next, “This Is Us” star Justin Hartley — who made his directorial debut on the show with tonight’s episode — told us Kevin (Hartley), Randall (Sterling K. Brown) and Kate are going to make good on their plans to go to the cabin together in the present day, where secrets will be revealed.

“The next episode in both the present-day storyline and in the teenage storyline, is a direct pickup from the trilogy,” Hartley said. “The Big Three are going to the cabin. All three of them are at their wits’ end. They have reached the point of no return where it’s like, we need an exhale. So they call each other, as you would you guess, they’re best friends and they’re of one mind and they go out and they wanna be alone. They wanna decompress. And all three of them sort of have different ways of decompressing.”

“And there’s a bunch of information that gets let out that wasn’t supposed to be,” he continued. “There’s information that was supposed to be held when it was in confidence, but is told — not nefariously, but forced out a little bit. People find out stuff and people get hurt and wonder why they were left out of the loop. And it brings them together in a way that is so perfect and so surprising and also kind of obvious… But they each come to some sort of resolution about their own lives. There are things that are said out of Kate’s mouth, out of Randall’s mouth and out of Kevin’s mouth that you’re like, ‘Oh, wow, these, people are evolving right before our very eyes.’ And they each help each other with that. And then there’s this fourth element that comes into play that gives them all a ton of perspective and it’s a big, big deal.”

When we asked Hartley if the secret that gets revealed is Rebecca’s memory problems — which both Randall and Kate know about at this point, but that Kevin doesn’t — he wouldn’t confirm, but he did tell us how he thinks Kevin will feel when he does find out he is the last to know.

“The cold reality is that because of his past and because of the things he’s gone through — and quite frankly, put the family through — there’s this sort of idea that Kevin’s this delicate person and that he can’t handle certain things,” Hartley said. “And it’s for his own good, I think. And truthfully, these are the kind of things that people that love each other do, they protect people in certain situations. But I also think Kevin has turned a page and he’s doing everything the right way, and in a way, he’s showing that he’s the one that’s actually the strongest out of the three of them, but he’s left out because of the sins of his past.”