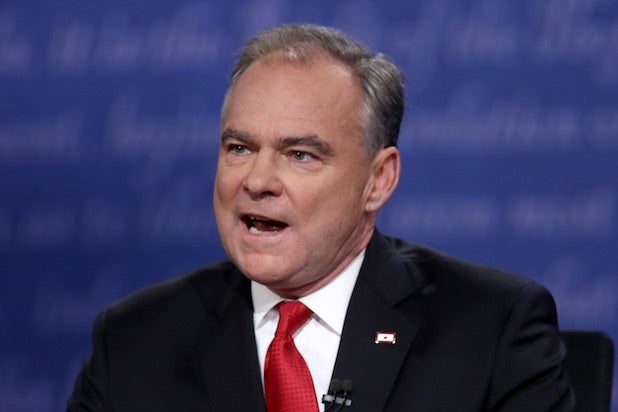 Kaine wanted to talk about the “tone that is set from the top” and went on to list a variety of the GOP candidate’s missteps.

“Donald Trump, during this campaign, has called Mexicans rapists and criminals. He’s called women slobs, pigs and disgusting,” Kaine said. “He attacked an Indiana-born Federal judge and said he was unqualified to hear a Federal lawsuit because his parents were Mexican. He went after John McCain, a POW, and said he wasn’t a hero because he had been captured.”

“He [Trump] said African Americas are living in hell and he perpetrated this outrageous and bigoted lie that President Obama is not a U.S. citizen,” he continued.

Kaine finished his attack by saying, “If you want to have a society where people are respected and respect laws, you can’t have someone at the top who demeans everyone that he talks about. Again, I can not believe that Governor Pence will defend the insult-driven campaign that Donald Trump has run.”

Pence was asked a question about immigration immediately following the attack on Trump’s comments and answered before saying, “I was listening to the avalanche of insults coming out of Senator Kaine a minute ago,” but Kaine interrupted. When Pence was finally allowed to finish him point he said, “He says ours is an insult-driven campaign? Did you all just hear that?”

Pence continued: “If Donald Trump had said all the things you said he said in the way you said them, he still wouldn’t have a fraction of the insults that Hillary Clinton leveled when she said that half of our supporters are a basket of deplorables.”