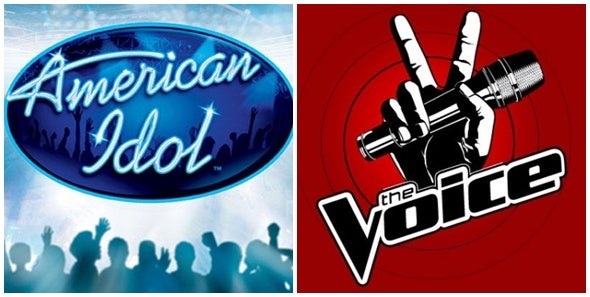 With the fourth cycle premiere of NBC's singing competition "The Voice" on Monday night, an age-old (OK, a year-or-so-old) question is back in play — just how did it fare against "American Idol"?

Looking at the ratings for Monday's "Voice" premiere, there's good and bad news for the NBC hit.

Also read: 'The Voice': Ratings, Talent .. But Where Are the Breakout Stars?

First, the bad news: The Monday premiere of "The Voice" couldn't touch the ratings of the "Idol" season premiere in January. Monday night's "Voice" premiere — which saw the debut of new coaches Shakira and Usher — drew a 4.7 rating/12 share in the advertiser-preferred 18-49 demographic. That's short of the 6.0/16 that "Idol" drew with its most recent season premiere.

In total viewers, "The Voice" also didn't measure up to "Idol," drawing 13.4 million compared to the 17.9 million that "Idol" attracted.

Also read: NBC's Broad Comedies and Broadway Haven't Worked — But Here's What Might

The good news for "The Voice"?

First, Monday's 4.7 rating tops every "Idol" telecast since January. And momentum appears to be on the side of "The Voice."

"The Voice," meanwhile, was up 12 percent in ratings from its fall premiere, and 9 percent in total viewers.

The "Idol" decline represents a pattern — the 2011 premiere was down 24 percent from the previous year's premiere. And the series has struggled with a month-long string of series lows for Wednesday performance episodes in recent weeks. (Its most recent episode last Thursday drew a 2.8/9 in the demo.)

The other good news for "The Voice"? It handily beat out the most recent season premiere for Fox's other singing competition, "The X Factor." Like "American Idol" and "The Voice," "The X Factor" revamped its panel for its new season and drew a 3.4/10 in the demo and 8.7 million total viewers.