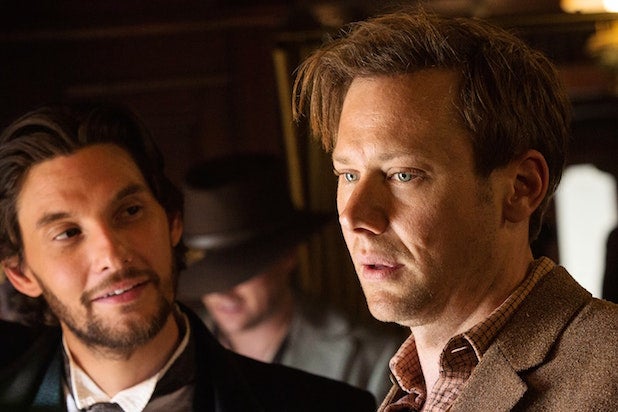 If you’re familiar with “Westworld” star Jimmi Simpson from memorable roles on “House of Cards” and “It’s Always Sunny in Philadelphia,” you may have expected the actor to play a very different part on HBO’s new sci-fi drama. And as it turns out, he could have.

Simpson told TheWrap that in an alternate universe, we might have seen him star in “Westworld” as his character’s obnoxious buddy Logan (Ben Barnes), who spits out lines about putting “memories in the spank bank.”

“I actually auditioned for both Logan and William, and there were just a couple of scenes they created for the audition that didn’t actually exist in the show,” he explained. “Logan was closer to my wheelhouse, and I had some interesting ideas for where to take him. But William was something I never really had been able to do, and I had to work with my partner because I couldn’t access my bag of tricks. It was just all new work.”

Simpson plays an eccentric hacker on “House of Cards,” and gets big laughs on “Always Sunny” as incestuous loon Liam McPoyle, so it’s not hard to imagine the actor as Logan.

Instead, he plays William, the one grown man in Westworld who didn’t come for the android hookers and the chance to blow everyone’s brains out without consequence. William has found a new life in Westworld as a bounty hunter looking to round up bad guys, much to the chagrin of his obnoxious buddy, Logan, who just wants Will to be one of those bad guys. It’s a change of pace for Simpson to play the moral compass.

So instead of seeing the head of the McPoyle clan stabbing an android in the hand with a steak knife, we now have Barnes, who first burst into the mainstream by playing Prince Caspian in the “Chronicles of Narnia” films, playing William’s insufferable companion. In next week’s episode, we’ll see William continue to come out of his shell as he goes to capture some bandits while Logan keeps begging him to play black hat instead.

But Simpson thinks the core difference between William and almost everyone else who comes to the park is the fact that he never wanted to come to Westworld in the first place.

“It’s Extreme Vegas, and it’s very expensive, so only a few people can take a part in it,” he said. “William is an exception because he’s dragged to this, as opposed to almost everyone else who has paid a lot of money to go there and rip shit up. So when you take out this expectation of destruction, you are left with wider eyes. I think William is able to observe more and to take part in the fantasy rather than stomp on it.”

New episodes of “Westworld” air Sundays at 8 PM on HBO.