Bill Richert, the lead plaintiff in the class action against the Writers Guild, writes to say that indeed, TheWrap's publication of Mial's testimony played a role in Tuesday's settlement.

"Your publishing the Teri Mial testimony scoop in thewrap definitely helped move the settlement forward, and served as a wake up call to waffling WGA board members, in this Lead Plaintiff's opinion, and I think in the opinion of my lawyers, who discussed your publishing the whole deposition in the courtroom, although what is said in these mediations is court-ordered confidential."

The WGA quietly settled a class action lawsuit over unpaid foreign levies this week, barely a week after WaxWord published the full deposition of whistleblower Terri Mial describing how she was instructed to ignore checks written to writers, and shredded the related lists.

After five years of ducking responsibility, the WGA has now agreed to pay out some $30 million in unpaid residuals and foreign levies that belongs to writers or their  heirs, who were presumably too hard to find. (Calling Preston Sturges.) 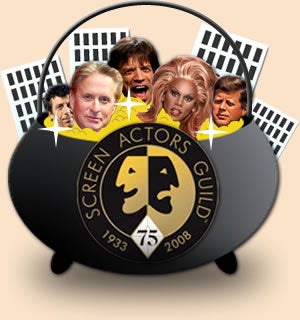 "Were you ever told to destroy documents?"

"There were a few that, after a certain period of time, like six months, we would keep certain records for six months, and after six months we shredded them."

"What kind of records are we talking about?"

"… Oh boy. Batch sheets. When checks come in, they’re batched, and each check is listed."

"Who told you to destroy those batches?"

The guild issued a statement this evening to TheWrap: "The Guild is pleased that the parties have reached agreement in principle on a settlement that will end the litigation and strengthen the foreign levies program, which has already resulted in the distribution of $70 million to U.S. writers, including $13 million in the last year alone."

And I’m told that guild president Patric Verrone crowed about the settlement at “Candidates Night” for the guilds this evening.

This comes close to putting to bed the whole ugly mess of foreign levies – what the hell is that all about anyway? – and unpaid residuals at all three major guilds.

“I think it’s a good result.” said plaintiffs attorney Paul Kiesel when I asked him about the outcome, which needs to be approved by the judge on Sept 21.

And why the sudden settlement after a full year of unfruitful negotiations?

Kiesel said he wasn’t sure. “There was a mandatory settlement conference,” he said. “We’ve had good faith negotiations. It broke down. There was no settlement. I can’t anticipate what it was that fundamentally allowd us to bridge the gaps yesterday.”

No details on the settlement were forthcoming.  (Kiesel previously told me he “knew nothing” about Terri Mial.)

But this may not be the end of the matter. Because another whistleblower, WGA member Eric Hughes, is convinced that this settlement is a whitewash.

It keeps the guild from having to reveal secret agreements it made to funnel foreign levy payments – taxes paid in Europe and elsewhere on blank video cassettes and DVDs since 1988 – to the studios.

“I’m opposed to this,” Hughes told me on Monday night.

“I look at the preliminary settlement as an attempt by the writers guild to get us members to sign off on an agreement that we were never aware of in 19 years.”

(Hughes has copies of all of them, having travelled around the world to track down agreements in foreign countries where the levies are collected.)

If and when this settlement is approved, Hughes plans to challenge it.

“This is not something for state court. If it’s to be played out in a court, it should be in U.S. district court, these are federal questions,” he said.

But in the meantime, out of three class action lawsuits – two are now settled. (The DGA settled last year.)

This leaves only the Screen Actors Guild, which it turns out has suddenly been able to find people it said were impossible to reach. It’s miraculous!

WaxWord can take some credit. Last year WaxWord wrote about $25 milion in unpaid residuals sitting at SAG. SAG quickly launched a campaign to locate those who were owed. Now I learn that only about $8 million remains in that account.

It’s pretty clear what’s going on here: settling these lawsuits recloses a very smarmy can of worms. No one in the establishment in Hollywood – not the studios, not the guilds – seem to want to delve into the mess that is the question of foreign levies.

So on the eve of a guild election, in the wake of a little embarrassing information – everyone figured out how to make it all disappear.