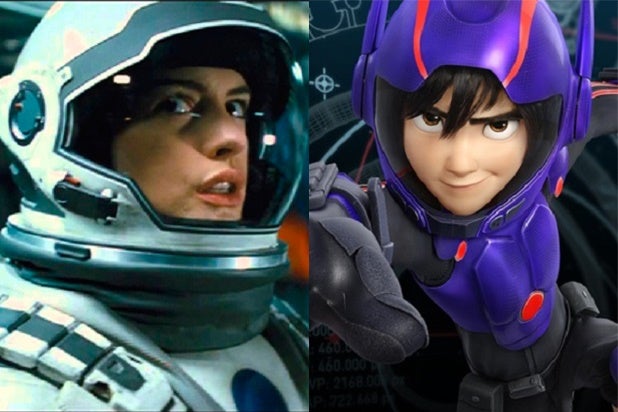 Will more kids drag their parents to see “Big Hero 6,” or will mom and dad take the family to Christopher Nolan‘s “Interstellar”?

That’s one of the questions looming over what is shaping up as the biggest box-office battle of the year this weekend, pitting Disney Animation’s Marvel Comics-inspired kids film against Paramount’s Matthew McConaughey space epic.

The PG-rated “Big Hero 6” has a slight edge going in say industry analysts, who project that the family-targeting tale of prodigy Hiro Hamada and his robot pal Baymax will take in around $65 million over the three days. Fans of sci-fi and director Nolan will drive the PG-13 space saga “Interstellar,” which co-stars Anne Hathaway, Jessica Chastain and Michael Caine, to land somewhere in the $55 million-$60 million range, they say. For the record, the studios are projecting lower totals.

Both movies represent big bets by Paramount and Disney. Nolan brought “Interstellar” in $10 million under budget, but it still cost $165 million. And “Big Hero 6,” the first Disney Animation release since “Frozen,” cost about the same.

“There’s a lot of difference between their film and ours,” he said. “And the dialogue around this weekend makes moviegoing a social currency in a certain sense, and with that energy as a catalyst, I can see both films benefiting.”

Here are several factors that will come into play this weekend:

Theater counts, 3D and IMAX
Disney has landed “Big Hero 6” in a very healthy 3,761 theaters, around 3,100 of which will be 3D. “Interstellar” wasn’t shot in 3D — Nolan is not a fan — and will be in roughly 3,500 theaters, 369 of which will be IMAX. Whether the upcharges from 3D will benefit “Big Hero” more than the giant-screen premiums do “Interstellar” will have a lot to do with who claims weekend bragging rights.

Word of mouth
The critics are keen on both films, but “Big Hero” has the edge with a 93 percent “fresh” rating on Rotten Tomatoes, compared to the 74 percent of “Interstellar.” Pay close attention to the CinemaScore and exit polling after Friday. Nolan fans are sure to drive big numbers early, but Friday should offer an indicator of what extent it is going to connect beyond that considerable base. If “Big Hero” comes out of Friday with an “A” or “A-” CinemaScore, it could take off on Saturday and Sunday.

Marketing
Paramount has pulled out every stop and seemingly created new ones to sell “Interstellar.” The higher profile plays included offering a free trip into space for some lucky advance ticket buyer and landing McConaughey on “Monday Night Football,” where he talked first downs — and wormholes — to a national audience before the game. For “Big Hero,” it’s all about the brand. On the heels of its success with “Tangled” and the blockbuster “Frozen,” Disney Animation has become a proven commodity for parents. And the “Marvel-inspired” tagline sure won’t hurt.

Social media
“Interstellar” appears to have an edge, with the caveat that sci-fi mavens and fan boys tend to be far more active than parents and young kids on social media. Its tweet count and Facebook likes are more than double that of another space epic, “Gravity,” at a similar stage before that film’s $55.7 million October debut last year. “Big Hero” is on the rise on both platforms, but lags behind another non-sequel animated film, “The Lego Movie,” which debuted with $69 million in February.

Advance sales
On Wednesday, “Insterstellar” was outselling “Gravity” as well as Nolan’s “Inception” and “Prometheus” at online ticket broker Fandango at a similar stage in their sales cycle. Some of that may be driven by Nolan aficionados heading for the early IMAX and 35mm and 70mm film screenings that began Wednesday. “Big Hero 6” is pacing ahead of “Tangled,” which opened to $48.7 million in 2010, and “Wreck-It Ralph” ($49 million in 2012), but behind “Frozen” ($67.3 million last November).

Perspective
This may be the most important factor to keep in mind this weekend. Looking at the history of marquee box-office matchups tells us that many films — like “Frozen” — have lost the opening weekend battle and gone on to win the global box office war.

Both “Interstellar” and “Big Hero 6” should play well over the long haul — after this weekend, there are only five more wide releases this month — and have a very good shot at topping $200 million domestically and grossing even more abroad. That would mean wins for both studios and Warner Bros., which is distributing “Interstellar” abroad, regardless of who takes this weekend’s prize.