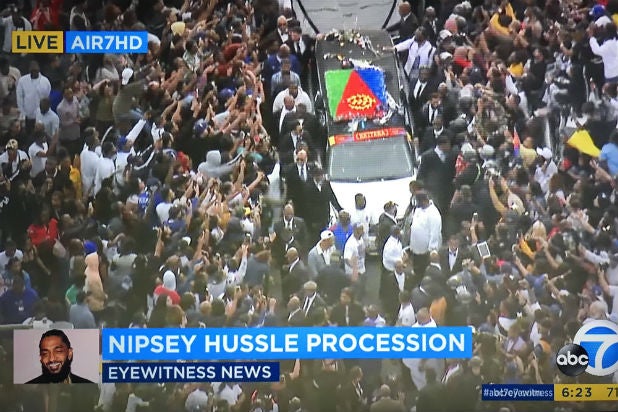 One person was killed and three others were injured Thursday during the funeral procession for rapper Nipsey Hussle, Los Angeles police chief Michel Moore said.

The unidentified victims, three African-American men and one African-American woman, all between ages 30 and 50, were shot at 103rd Street and Main Street in South Los Angeles, Moore said. The suspects, who have also not been identified, opened fire from a gray Hyundai, police said.

“We must stop this senseless violence,” Moore said.

LAPD representatives did not immediately respond to a request for further comment from TheWrap.

Nineteen people were injured during an April 1 vigil for the rapper, an LAPD spokesperson told TheWrap.

Hussle, real name Ermias Asghedom, died March 31 after being shot multiple times outside of a store he owned. His death rocked South Los Angeles, where the rapper grew up and continued to invest in businesses and charitable ventures. Earlier this week, L.A. City Councilman Marqueece Harris-Dawson announced that the intersection of Crenshaw Blvd. and West Slauson Ave. will be named Ermias “Nipsey Hussle” Asghedom Square in his honor.

LAPD identified 29-year-old Eric Holder as the suspect in Hussle’s murder. Holder was taken into custody on April 2, and has since pleaded not guilty.

In the midst of this procession we have a multi-4 Shooting at 103 St and Main St.

Victims are 3 Male Blacks and 1 Female Black – ages from 30-50 years old. Tragically one is deceased.

Suspects in gray Hyundai fired on the victims.

We must stop this senseless violence.