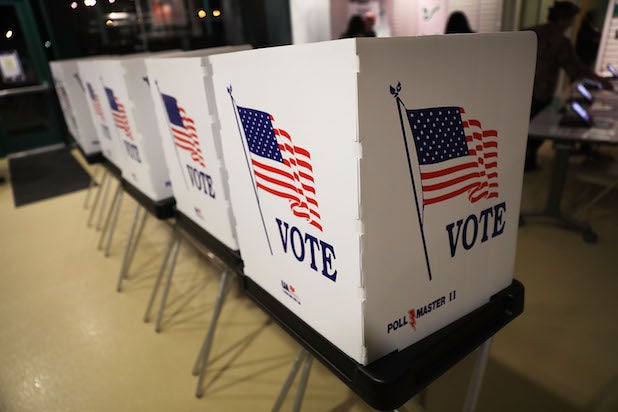 Ahead of Tuesday’s midterm election, celebrities made their closing arguments Sunday for their favorite candidates and causes — or for voting in general.

Stephen King asked Iowans to vote against the like-named Rep. Steve King “for personal reasons”: He said he’s “tired of being confused with this racist dumbbell.”

Iowans, for personal reasons I hope you’ll vote Steve King out. I’m tired of being confused with this racist dumbbell.

Attention Georgia!!! I’m officially endorsing @staceyabrams for Governor. She is without a doubt the right person for the job. But the only way this can happen is if you get out and vote. Let your voice be heard, don’t let anything stop you from voting!! IT’S TIME TO FIGHT BACK. pic.twitter.com/BkaHsEK1kd

Adam Scott got right to the point about his feelings for Abrams.

I F**KIN’ LOVE YOU @staceyabrams https://t.co/gvBMzCLY2u

Illinois-This woman is neck in neck for her race, and she needs us to help her amplify. She is an inspirational leader and deserves this seat. It’s time for real representation in Congress. https://t.co/Cr7whnIfmg

Zachary Quinto supported Emily Skopov, who is running for state representative in Pennsylvania. He calls Skopov “an everyday citizen compelled to run for office because of the restrictive discriminatory and self-serving policies of the old guard straight white men who have clung to power for far too long.”

i’m so grateful i got to launch today’s canvas for emily skopov! she is running for state representative in pennsylvania’s 28th district and is an incredible example of democracy in action. an everyday citizen compelled to run for office because of the restrictive discriminatory and self-serving policies of the old guard straight white men who have clung to power for far too long. she is within striking distance of defeating her opponent on tuesday and i couldn’t be more excited to support her and all that she represents – including women’s rights – lbtq rights – education – and important governance reform such as #fairmaps GET UP! GET OUT! VOTE! @emily4pa @demredistrict

Several stars including Jodie Foster, Kyra Sedgwick and Eric McCormack got behind Katie Hill, who is a congressional candidate in Santa Clarita, California.

I cannot WAIT to go [email protected] doors for @KatieHill4CA in #CA25 tomorrow at 9AM!! If you’re in the neighborhood,join me and help #TakeBackTheHouse https://t.co/8LxndYPCYy

It was great to connect, and remind people how crucial their #VOTE is. Early voting at Lancaster Library till 4 pm today, folks! @KatieHill4CA #VoteBlue2018 https://t.co/Ms3jOLS4cj

America Ferrera and Zoe Saldana urged Latino voters to get to the polls:

We’re heading to Miami, FL to rally the Latino Vote!  Meet us at Ball and Chain at 4:00pm https://t.co/fDLPoM1XY1 Join us!  And follow our journey on @nowthisnews #LatinosStandUp @evalongoria @hereisgina @rosariodawson @zoesaldana pic.twitter.com/4KK6gOTvvE

This is another moment to stand for Standing Rock. Native people are here, they’re resilient, and despite the laws trying to suppress them, they’re ready to vote.

Text STAND to 788683 to take the #StandNVote pledge. Let’s bring this home. pic.twitter.com/mHYLqrkQ4u

And Bellamy Young was “knocking on doors & talking w/ my North Carolina family about the need to vote for #fairmaps candidates”:

State and local politics affect our daily lives just as much as what happens in Washington. That’s why I’m home today knocking on doors & talking w/ my #NorthCarolina family about the need to vote for #fairmaps candidates all the way down the ballot on Election Day!????????✅❤️???? pic.twitter.com/HK7UfBnWKC