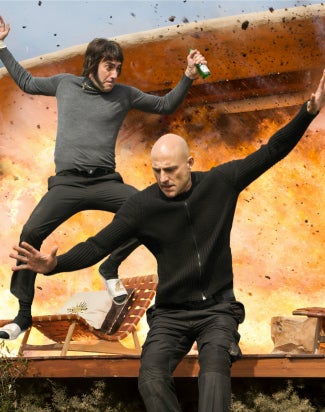 “The Brothers Grimsby” is off to a grim start at the box office this weekend after grossing just $235,000 from 1,937 locations on Thursday night.

J.J. Abrams‘ latest production, “10 Cloverfield Lane,” on the other hand, had an impressive start to its opening weekend. The thrilled scared up $1.8 million from approximately 2,500 locations.

Tracking for a $20 million weekend, “10 Cloverfield Lane” isn’t a sequel to the 2008 breakout hit “Cloverfield,” despite its title.

Also Read: Why 'Zootopia,' 'Brothers Grimsby' and Other Movies Change Titles When They Open Overseas

Director Dan Trachtenberg‘s feature film debut was called “The Cellar” when it was in the script stage in 2014. It subsequently became “Valencia,” and then took on its current title during development at Bad Robot Productions to evolve into what Abrams has called a “blood relative” or “spiritual successor” to “Cloverfield.”

Cohen’s film, which welcomes him back to the big screen after starring  in “Les Miserables” in 2012, is tracking for $10 million, according to estimates.

The Sony Pictures Entertainment release appears unlikely to match the openings of Baron Cohen’s two most recent R-rated comedies “Bruno,” which debuted to $30.6 million in 2009, or “The Dictator,” which rolled out to $17 million in 2012.

It is looking to make under $10 million its opening weekend. Adam Greaves-Neal stars in the film directed by Cyrus Nowrasteh, who co-wrote the screenplay with his wife Betsy Giffen Nowrasteh. Anne Rice wrote the novel it’s based on.

“The Perfect Match,” executive produced by Queen Latifah, took in $155,000 at just 790 locations on Thursday, and is looking to gross less than $5 million this weekend.

Terrence J, Cassie Ventura, Lauren London and Paula Patton star in the film, which is based on a screenplay by Dana Verde and written by Brandon Broussard and Gary Hardwick. CodeBlack Entertainment produced and Lionsgate is distributing.

Disney’s “Zootopia” will still reign at the box office this weekend, which will most likely make another $40 million its second weekend after grossing a record-breaking $75 million during its debut.