It’s not often that a story about an A-list Oscar winner taking on a gossip columnist makes you smile and think better of both parties when the dust has settled. But that’s exactly what happened this week when Russell Crowe, having endured a day’s worth of being stalked by Sydney’s tabloid The Daily Telegraph, who were intent on belittling his exercise-and-ciggies routine, called up the journalist in question and laid the smack down. It’s an amusing read — there’s video too. Credit to Annette Sharp for putting her money — or at least her calf muscles — on the line.

2. Blue Is The New Black

First there was Dr. Manhattan in “Watchmen”. Then there’s the horde of Na’vi about to descend in “Avatar.” The first images of the Smurfs movie are out. Guy Ritchie has signed up to make a film featuring D.C. Comics’ berserker Lobo — also of the hue.

Now it has been announced that on December 17, 2010, the blue hero of “Tron Legacy” goes up against… “The Green Hornet." Is it too late for Sony to put a color wash over Seth Rogen to make him blue?

3. But If You Really Want Blue…

Check this out. It’s Bollywood. It’s “Fast & Furious,” it’s “Deep Blue Sea,” it’s “Chicago.” It’s explode-y and bite-y and dance-y and rather brilliant. Added down under the water Down Under interest: the songstress gyrating in this epilepsy inducing trailer is Kylie Minogue 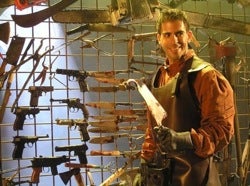 4. Eli Roth Loves the Animals (Surprise, He Loves Them Alive) 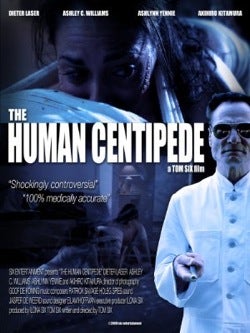 The various outrages in “Hostel” and its follow-up sound positively PG-13 compared with the description of a film presently playing FrightFest in the UK. “Human Centipede: The First Sequence” from writer-director Tom Six has, shall we say, an unusual premise. As Dustin Rowles of www.pajiba.com describes it: “A respected Siamese Twin surgeon has developed his future vision of the world.

He wants to remove all humans’ kneecaps and then graft the humans together, mouth-to-anus, to form a human centipede. He kidnaps two American women and a Japanese man and begins the tissue matches, teeth removal, and buttock moulding to create his triplet creature, aka, the First Sequence.”

I especially admire the poster’s claim that it’s “100% Medically Accurate” and I can’t wait for the studio remake of this one.

It was 50 years ago this week — September 9, 1959 — that Ed Wood’s “Plan 9 From Outer Space" finally got its release, having been finished some three years earlier. A remake is in the works and the guys at Darkstone Entertainment had originally hoped to have it ready for the 50th anniversary. But, as they explain: “We hoped to have principle photography of the film finished by last March but we were able to increase our budget and move from shooting on super 16mm to super35mm by waiting.”

Not wanting to disappoint fans, they are unveiling the teaser trailer on 9/9/09.

In the meantime, take a moment to reflect the most enduring achievement of Ed Wood, a true underdog hero of the movies.

… but this is ridiculous. A 27-year-old Boston man named Arnold Milfort risked life and limb to get onto the set of “The Zookeeper” by posing as an employee of Franklin Park Zoo, where the film’s being shot. Milfort nearly saw his personal end credits roll when he fell 30 feet into a pit being used as a lion’s den set. Luckily, he suffered only minor injuries. Apparently, this is but the latest incident involving fans trying to bust into the zoo. Question: who are they trying to get close to, Rosario Dawson or Kevin James?

Another name has been added to the roster of Australian beauties bubbling up under the likes of Cate, Nicole, Naomi, Toni and Co. 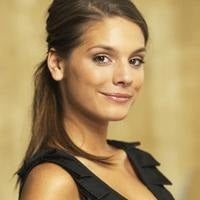 Add to the list that includes Abbie Cornish and Emily Browning (about to start filming on Zack Snyder’s “Sucker Punch”), Mia Wasikowska (Alice in Tim Burton’s “Alice In Wonderland) and Emma Booth (Joel Schumacher’s “Town Creek” and Shine director’s Scott Hicks’ “The Boys Are Back”, premiering at Toronto) the name Caitlin Stasey.

This 20-year-old, who has carved out a career at home on TV soaps, has just landed the lead role of Ellie in “Tomrrow, When The War Began”, which is based on a best-selling series of novels about teenage resistance to an invasion Down Under. Interest should be high, given it’s backed by Paramount and marks the directorial debut of Stuart Beattie, who wrote “Collateral”, “G.I. Joe”, and who devised the story for “Pirates Of The Carribbean." 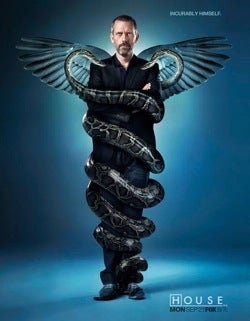 Okay, not really. It’s the promo image for season six of “House”. But imagine if ailing TV really did introduce B-grade schlock-horror as a ratings booster? I mean, who wouldn’t tune in to see the cast of “Two And A Half Men” have to deal with vicious brain parasites triggered by the utterance of single-entendre sex jokes?

Or a special zombie attack episode called “Jon And Kate Got Ate”? Or “Grey’s Anatomy”, which has already been down the stupid-natural route, go even tackier with the introduction of an organ-collecting serial killer? Suggestions welcome!

I loved “The Boondock Saints”. Watched it three times in a row. I know, geeky, right? And even after watching “Overnight”, the warts-n-all documentary about how success screwed up of its writer-director Troy Duffy, I still want to see what the man was capable of. Dude had some style.

Now, 10 years later, his sequel, “The Boondock Saints 2: All Saints Day”, is almost here. Okay, so the trailer looks like a lot of stylized violence that went out of vogue… well… about a decade ago, but I’m still hankering to see this.

As they said in the original, “Catch ya on the flipside."