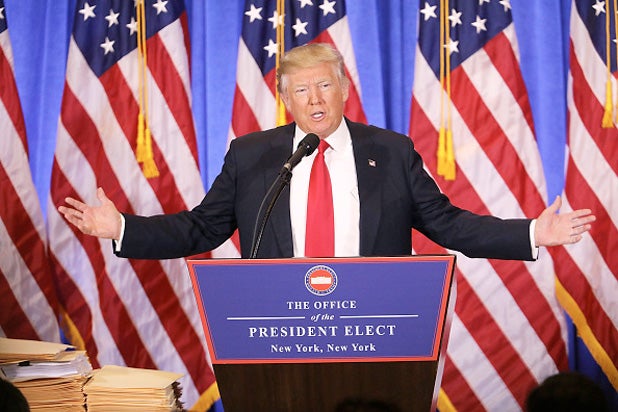 Donald Trump held his first press conference in 167 days on Wednesday at Trump Tower in New York and things got heated quickly as the president-elect was combative with members of the news media.

The wide-ranging press conference was both combative and enlightening, with the president-elect touching on a variety of topics, ranging from Russia to the mainstream media.

Here are the 11 most memorable quotes:

1. On a controversial tweet in which Trump compared America to Nazi Germany when he suggested the intelligence community might have allowed the Russian dossier to leak to the press

“I think it’s a disgrace. And I say that, and I say that. And as something that Nazi Germany would have done — and they do.”

2. On the inauguration, which, as first reported by TheWrap, Trump has found it difficult to land big-name performers

“I look very much forward to the inauguration. It’s going to be a beautiful event. We have great talent, tremendous talent. And we have all of the bands — or most of the bands from the different segments of the military. And I’ve heard some of these bands over the years — they’re incredible. We’re going to have a very, very elegant day.”

“I think it was Russia. But I think we also get hacked by other countries and other people.”

4. On his tax returns

“I’m not releasing the tax returns because, as you know, they’re under audit… The only one that cares about my tax returns are the reporters. They’re the only ones.”

5. On his relationship with Vladimir Putin

“Well, if Putin likes Donald Trump, I consider that an asset, not a liability. Because we have a horrible relationship with Russia. Russia can help us fight ISIS.”

6. On the content of the Russian dossier, which included the now-infamous “golden shower” allegations

“It’s all fake news. It’s phony stuff. It did not happen. And it was gotten by opponents of ours, as you know because you reported it and so did many of the other people. It was a group of opponents they got together — sick people — and they put that crap together,” Trump said. “So I will tell you that not within the meeting, but outside the meeting, somebody released it. It should never have been — number one, should never have even entered paper. But it should never have been released. But I read what has been released, and I think it’s a disgrace. I think it’s an absolute disgrace.”

7. On what he would have done to a staffer that spoke about him the way Clinton campaign manger John Podesta spoke of Hillary in leaked emails

“If somebody said about me what Podesta said about Hillary, I was the boss, I would have fired him immediately. Or that person. Because what he said about her was horrible.”

8. On a fence along the Mexican border

“It’s not a fence, it’s the wall. You just misreported it. We’re going to build a wall.”

“As far as BuzzFeed, which is a failing pile of garbage, writing it, I think they’re going to suffer the consequences.”

“Your organization is terrible… You are fake news.”

11. On details of the dossier that could be used for blackmail, such as the ‘golden showers” story

“Does anyone really believe that story? I’m also very much of a germaphobe, by the way. Believe me.”