Show-business notables including Jeff Goldblum and Mindy Kaling took time out from their entertainment duties on Tuesday to cast their votes in the midterm elections, and to encourage others to do the same.

From tweets boasting poll selfies to the classic “I Voted” sticker pose, these stars have shared their voting status and their reasons to vote.

Posing in a suave black leather jacket and hat, actor Jeff Goldblum proudly wore his “I Voted” sticker on Instagram. In his post caption, Goldblum included an inspirational quote from the fictional President Thomas J. Whitmore from the 1996 film “Independence Day.”

Though “Sex and the City” star Cynthia Nixon lost to fellow Democrat Andrew Cuomo for the New York gubernatorial race in the November primaries, she still voted “because the patriarchy isn’t going to dismantle itself.”

#IVoted because the patriarchy isn’t going to dismantle itself pic.twitter.com/A7e6sdurwC

In a short Twitter video, Zendaya showed off her sticker, asking followers if they’ve also fulfilled their civic duty.

Comedian John Mulaney, known for stand-up specials like “The Comeback Kid,” stood alongside his wife Annamarie Tendler in an Instagram post showing off their “I Voted” stickers.

We voted! And we agreed on this photo!

“Jack Ryan” star John Krasinski and Emily Blunt shared a quick picture of their absentee ballots on Instagram with the simple caption, “#Vote.”

Seth Meyers Instagrammed this post-voting pic with his wife and son. Though his son though they were going to a “boat” instead of vote, the family was all smiles.

Also Read: Freaked Out Voters Vent Frustrations Over Midterms With 2016 vs 2018 Meme - and It's Epic

Our son was disappointed because he thought we were going to “boat” but otherwise a success! #Vote

I did it! Felt soooooo good. #Vote #whenweallvote #WeMatter

Amy Poehler sported her “I Voted” sticker in an in-your-face fashion for this round of elections.

Justin Timberlake threw up deuces with his absentee mail ballot.

It’s #TheLastWeekend to get out there and get involved! My absentee ballot’s in… make sure you GO VOTE on Tuesday!! Remember: NO voting booth selfies ???? More info in bio.

Taylor Swift, once politically elusive, also shared a message on her Instagram story: “I promise it feels so wonderful to exercise that right that you have.” 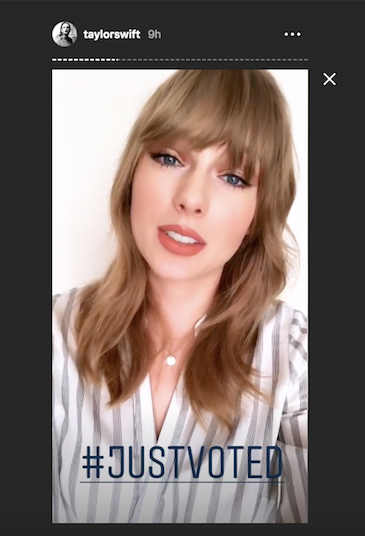 Voting is still voting even if it’s two days before election day. Camila Cabello boasted not one, but TWO “I Voted” stickers after voting early.

I JUST VOTED IN MY STATE OF FLORIDA!!!!!!!! ELECTION DAY IS NOVEMBER 6 AND EARLY VOTING GOES TO NOVEMBER 4. GO TO VOTE.ORG TO FIND YOUR NEAREST POLLING PLACE, THIS WEBSITE’S INFORMATION IS SO CLEAR AND EASY TO UNDERSTAND. I AM SORRY FOR THE CAPITALS, I JUST FEEL REALLY EXCITED THAT I JUST VOTED BECAUSE I FEEL LIKE IM TAKING MY FRUSTRATION AT THE INJUSTICES THAT HAPPEN IN OUR COUNTRY AND TURNING IT INTO ACTION!!! EVERY SINGLE ONE OF US CAN TURN THOSE FEELINGS INTO ACTION WHEN WE SHOW UP TO VOTE. ONE VOTE CAN MAKE A DIFFERENCE. WE CAN CONTRIBUTE AND HELP WRITE THE STORY OF OUR COUNTRY JUST BY TAKING A FEW MINUTES OUT OF OUR DAY TO VOTE!!! ALSO ITS MY GRANDMAS FIRST TIME VOTING IN THE UNITED STATES AND SHE DID HER RESEARCH AND PREPARED HERSELF AND WE ARE ALL FEELING SO GOOD !!! LETS. GOOOO. LETS VOTE! ➡️➡️➡️➡️➡️➡️➡️VOTE.ORG.

Even an ocean away from her New York home, Madonna managed to vote in the midterms.

Mindy Kaling thanked the 14th and 19th Amendments for giving her the chance to vote.

Thank you 14th & 19th Amendment for letting me vote today! Comment or tag yourself if you feel the same!

Musician Conor Oberst posed in front of the polls in a Tuesday Tweet. “Hope lives,” added Oberst to his Tweet.

Please go vote! Preferably against all Trump allies complicit in his Racist, Misogynist, Xenophobic, Homophobic, Transphobic and all around fear based agenda. Hope lives! ???????? ❤️ ???? ✊???? pic.twitter.com/vzCm6laAKO

And for those of you who are still questioning whether your vote truly matters, Jennifer Garner had a message for you.