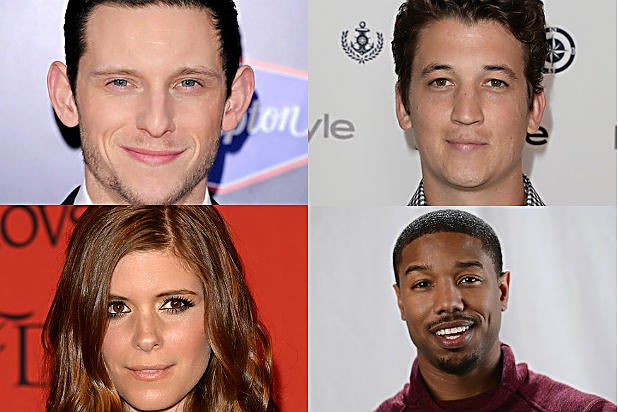 Has 20th Century Fox found its “Fantastic Four?” It sure seems that way, as Hollywood was buzzing Wednesday with news that Miles Teller, Michael B. Jordan, Kate Mara and Jamie Bell are nearing deals to star in the studio’s reboot of the popular comic book franchise, multiple individuals familiar with the superhero movie have told TheWrap.

20th Century Fox had no comment, while representatives for Teller, Mara and Bell did not immediately respond to TheWrap’s request for comment.

Insiders with knowledge of the drawn-out casting process have told TheWrap that Bell is in heavy discussions to play Ben Grimm, aka The Thing. Bell’s name has never been mentioned in connection with the coveted superhero role, though it certainly makes sense as he has experience with motion-capture performances, having starred in Steven Spielberg‘s “The Adventures of Tintin.” However, there is no official deal in place for Bell yet.

Also read: What’s the Deal?: Which ‘Spectacular Now’ Star is Being Eyed for ‘Fantastic Four?’ (Exclusive)

Jordan is set to play Johnny Storm, aka the Human Torch, while Mara is in final negotiations to play his sister Sue Storm, aka the Invisible Woman. It remains unclear how the film will explain their relationship as siblings — whether one will be adopted or if they share a parent.

Teller is the studio’s top choice to play team leader Reed Richards, aka Mr. Fantastic, and while the “Whiplash” star is eager to tackle the role, there is a significant obstacle that must be overcome first.

See photos: 12 of the Whitest Superheroes in the Universe

Teller plays Peter in the upcoming tentpole “Divergent” and has a deal to reprise his role in the sequel “Insurgent,” which is expected to start production in Louisiana at the same time as “Fantastic Four.” If his shooting dates can’t be worked out with “Insurgent” studio Lionsgate/Summit, the role of Mr. Fantastic may have to be recast.

While one studio source cautions that chemistry between the four actors is vital to the casting process and if Teller’s deal doesn’t close, it could affect the casting of The Thing, another insider told TheWrap that Bell is unlikely to be impacted by Teller’s casting.

Jordan and Teller recently co-starred in “That Awkward Moment” and are planning to reteam with director Tom Gormican on an untitled heist movie in development at Warner Bros.

Mara and Bell share their own history, as both are attached to star in the indie boxing movie “Fighting Jacob,” which coincidentally is being produced by Jordan’s manager Kenny Goodman.

Also read: 10 Superhero Sequels That Soared – or Sank – at the Box Office

Josh Trank (“Chronicle”) is directing the “Fantastic Four” reboot, which Fox will release on June 19, 2015.