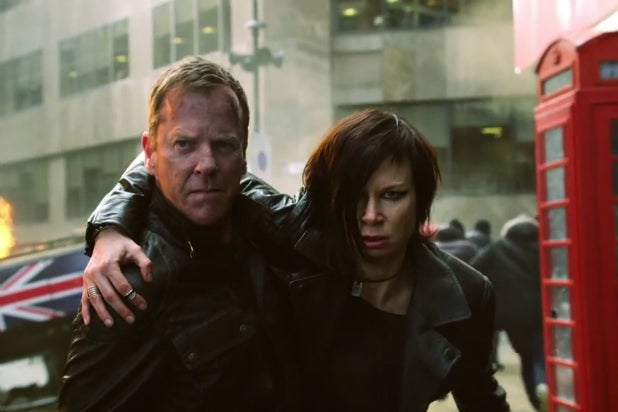 The “24: Live Another Day” teaser opens on bullet-holes ripping through on overturned mini-car, complete with a British flag painted on the side.

Fox’s “Street Chaos” trailer, released during the one-sided Super Bowl XLVIII, was aptly named for its 48 seconds of across-the-pond drama — which all takes place in real-time, of course.

This time around, Jack Bauer (Kiefer Sutherland) is called upon to thwart a terrorist attack in less-than-jolly old England, though the heroic agent was not able to prevent whatever happened to cause the destruction in the below video.

In the clip, a leather-clad Bauer carries the leather-clad Chloe O’Brian (Mary Lynn Rajskub) out of fiery smoke and past a charming London telephone booth, points his gun just past the camera and opens fire at an anonymous enemy.

The 12-episode run also stars Benjamin Bratt, Williams Devane, and Kim Raver. The limited-run series brings Bauer back to Fox on May 5.