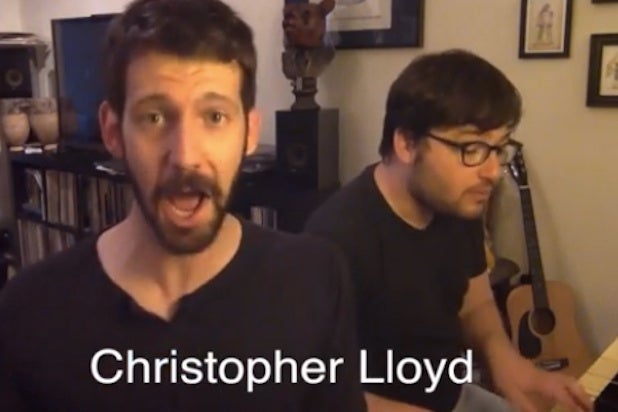 Musician Rob Cantor struck a chord with social media on July 1 when he released a video demonstrating his ability to imitate 29 famous voices. The only catch — he didn’t actually do any of the impressions, but he’s ready to introduce you to the talented professionals who did.

Cantor may not be able to do any celebrity impressions but he sure knows how to create a hit viral video. A gifted musician who wrote the original song “Perfect,” Cantor had the clever idea to promote his song by shooting a music video using the gimmick of celebrity impressions to draw an audience — which worked beyond his wildest dreams.

The video received nearly 7 million views on YouTube in less than 10 days, and Cantor was flooded by media requests, including one from the likes of the “Today” show.

Also read: 29 Famous Hollywood Impressions Performed by One Guy in One Song (Video)

With Tally Hall’s Andrew Horowitz accompanying him on the piano, Cantor needed 39 takes to perfect his lip-synching abilities, as well as the help of more than a few “famous” friends.

Cantor came clean in a YouTube video posted on Wednesday. “I cannot do a single celebrity impression. This is the work of talented professionals,” admitted Cantor, whose friend, Lindsay Alvarez, served as sound designer and mixer for the hit viral video.

“I’m taking all the voices that Rob recorded. I added some room tone, chair squeaks, redid the piano, redid all the breaths, and put all that together to make it as believable as it can be,” explained Alvarez.

The actual impressionists include:

Watch Cantor’s tongue-in-cheek reveal below, and then search for his parody songs “Actual Cannibal Shia LaBeouf” and “Christian Bale Is At Your Party.”