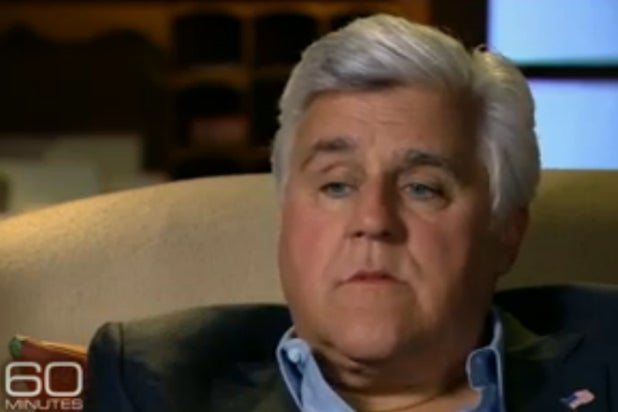 Jay Leno departs “The Tonight Show” — again — on Thursday, Feb. 6. This time, his exit and the show’s subsequent transition to Jimmy Fallon has been handled (seemingly) with more grace, and the late night mainstay even appeared to be at peace during a “60 Minutes” sit down that aired before the Grammys on Sunday.

Last week, TheWrap reported on a preview of the Steve Kroft interview, where Leno said he was “blindsided” by the news that he’d be exiting in 2009. In the full, near-15 minute piece, Leno offered more detail on the difference between then and now, his new heir, and a little insight into what the comedian may do next.

Here are five other quotes from the full piece, which can be viewed in its entirety below:

Steve Kroft: “Did you try and talk NBC into getting rid of Conan so you could come back?”

Jay Leno: “No, never. I never in my wildest dreams thought that would happen, never. It never occurred to me that they asked me to come back. I thought he would do fine.”

Why This Time Will Be Different
Jay Leno: “Talented people will only wait so long before they get other opportunities. And you don’t want to lose that opportunity. That makes sense to me. And I thought Jimmy’s been extremely gracious and polite.”

Steve Kroft: “You said all of the same things, exactly about Conan.”

Leno the Lone Wolf
Jay Leno: “No, I don’t have an agent or a manager, but the nice thing is I get the unfiltered truth this way. No one says, ‘Look, Leno sucks. He stinks. We want him out of here.’ ‘Jay, they’re very happy with you, but they want you to change–‘ well– well– I get it right from the horse’s mouth, you know? And that’s– that’s what I prefer.”

On Knowing When to Hang it Up
Jay Leno: “I get it, you know? Johnny was 66 when he left. I would be 64 when I leave. And that’s about right, you know? I really like Jimmy Fallon. I think he’s terrific. You know, when I see him do a dance number with, you know, Justin Timberlake or somebody, I go, ‘I can’t do that.'”

‘I think after a while, you know, I’m not gonna be that up on the latest Justin Bieber record when you’re 64.’

So … What’s Next?
Jay Leno: “I don’t know what I’ll do. Will I do another late night show to go against any of these people? No. No, that– no. You can’t recreate what we had at ‘The Tonight Show.’ That was a 22-year moment in time. It was fantastic. And I loved it. Would I like to do things with– oh, I don’t know, History Channel? Yeah, I think that would be fun to do.”