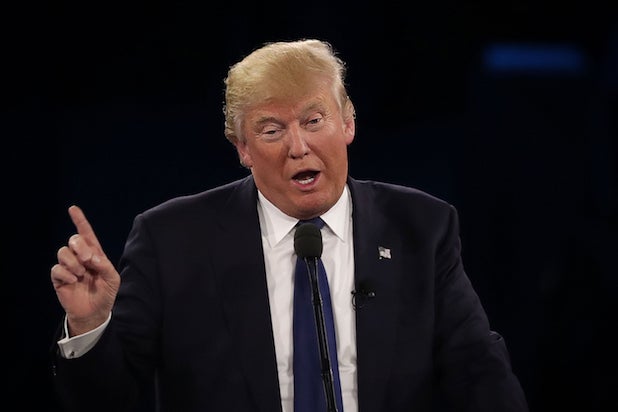 Turns out all Donald Trump needed to appear more presidential was a teleprompter and a little bit of chutzpah.

The business mogul sounded every much his party’s presidential frontrunner as he delivered a speech on Monday before the American Israel Public Affairs Committee (AIPAC), the nation’s foremost pro-Israel lobbying group.

Trump was there to make one thing clear:  He’s on Israel’s side. In a moment that had the crowd cheering, Trump called on the Palestinians to end the cycle of hate and stop rewarding terrorists.

“Israel does not name public squares after terrorists. Israel does not pay its children to stab random Palestinians,” Trump told a the audience at at the Walter E. Washington Convention Center in Washington, D.C. “When I become president, the days of treating Israel like a second-class citizen will end on Day 1.”

Here are the top 5 most Kosher moments from Trump’s speech that brought people to their feet:

1. Trump fires up the crowd on “disastrous” Iran deal
Say what you will about Donald Trump, he knows how to play to an audience. He gave members of AIPAC everything they wanted to hear … and then some, proclaiming that his “No. 1 priority is to dismantle the disastrous deal with Iran,” calling it “catastrophic.”

Trump then went through a list of Iran’s “horrible acts of terror,” calling their actions “a deplorable situation.”

“We will enforce it like you’ve never seen a contract enforced before,” he said. “Believe me.”

2. Trump gives AIPAC a free lesson in “Middle East 101”
What a difference three months can make. Last time Trump spoke to a Jewish audience, it wasn’t exactly a home run. Addressing the Republican Jewish coalition in December, Trump seemed to be swallowing matzah balls as he tried to cozy up to Jewish conservatives by saying that he was “a negotiator, like you folks,” then telling a stunned crowd that they probably won’t support him “because I don’t want your money.”

Not this time. With a seemingly pitch-perfect command of Israeli geography and a firm grasp of complex geopolitical nuance, Trump proved that he’s done his homework.

Talking about Iran’s ballistic missiles, Trump went into an anecdote that played perfectly to his audience.

“You wanna hear something really shocking?” Trump asked the audience. “Painted on those missiles in both Hebrew and Farsi were the words, “Israel must be wiped off the face of the earth. You can forget that. What kind of demented minds write that in Hebrew?”

3. Trump scores points by slamming the United Nations
It’s no secret that Israel is not exactly the U.N’s biggest fan. The organization’s Human Rights Council has issued more condemnations against Israel than against all other countries combined, according to a 2015 report by the civil rights group UN Watch.

4. Trump urges Palestinians to stop inciting hate
Trump did not mince words when it came to criticizing the recent wave of stabbings in Israel.

“Every day, they’re stabbing Israelis and even Americans,” Trump said referring to a Vanderbilt University graduate student, Taylor Force, who was killed in an attack earlier this month, describing him as “a West Point grad, phenomenal young person who served in Iraq and Afghanistan [and] was murdered in the street by a knife-wielding Palestinian. You don’t reward behavior like that.”

While Jerusalem is the official capital of Israel, the American embassy is located in the coastal city of Tel Aviv.

“We will move the American embassy to the eternal capital of the Jewish people, Jerusalem,” Trump said, adding that Israel “will forever exist as a Jewish state.”

And just to make sure people know how committed he is to Israel, he ended his speech with this little tidbit: “My daughter Ivanka is about to have a beautiful Jewish baby.”