Looks like Netflix has another hit on its hands with “Stranger Things.”

The thriller about what happens after a young boy disappears in 1980s small-town America has touched a nerve with viewers, who have flocked to social media to ponder its twists and odd resolutions. And many critics are giving the eight-episode series the thumbs-up as well, and a result the streaming service has its most-talked-about series premiere since “Making a Murderer” late last year.

Here are five reasons why:

The show is a wonderland of ’80s nostalgia.

If you just love the decade that brought us Men at Work and the Iran-Contra scandal, “Stranger Things” will send you back there. And critics — many of whom came of age during that era — are eating it up.

It borrows from the best.

“Stranger Things” is, perhaps above all else, a homage to the Spielbergian universe, where childhood wonder is mixed with a bit of otherworldly menace, à la “E.T.: The Extraterrestrial.” The Duffer brothers leave little doubt about their creative inspirations, according to critics.

As Todd VanDerWerff wrote on Vox: “‘Stranger Things’ exists in the center section of the three-circle Venn diagram that connects the respective 1980s films of Steven Spielberg, Stephen King, and John Carpenter — at least to the degree that Stranger Things‘ title font is exactly the same as the one that used to adorn the covers of King’s books.” 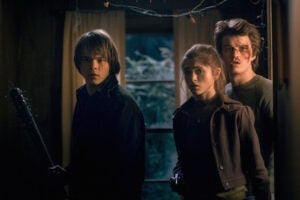 It’s got a few real scares in it.

Lest you think that “Stranger Things” is simply a salute to Spielberg from two fanboys, make no mistake: The series does contain a few jump-off-your-sofa frights, as well as a lingering aura of creepiness.

VanDerWerff summarizes the story as about preteens “who encounter something slightly terrifying. In this case, the slightly terrifying ‘something’ is a strange monster that comes from an alternate dimension the kids call the ‘Upside Down.’ The monster captures one of them in the first 15 minutes of the first episode, and the rest of the season deals with trying to rescue him.”

Also Read: Wil Wheaton on Why 'Stranger Things' Could Be This Generation's 'Stand By Me'

McNamara added that “when it does work, which is most of the time, ‘Stranger Things’ is genuinely creepy and sincerely sweet, two great tastes that may, in the parlance of the times, taste great together but are difficult to blend successfully. As the many filmmakers hoping to become the next Spielberg have learned over the years.”

A whole new generation is now getting acquainted with the 44-year-old Ryder (pictured, above), who back in the 1980s and early ’90s was a huge movie star in hits such as “Beetlejuice,” “Mermaids” and “The Age of Innocence.”

That she has returned in a series like “Stranger Things” is no accident, some reviewers have noted.

“The presence of Ryder is symbolic of why the whole thing works,” wrote Alan Sepinwall on Hitfix. “The Duffers cast her because she’s most iconic for her roles in the ’80s (if ‘Stranger Things’ were actually being made in 1983, she’d be the right age to play [a crucial young character nicknamed] Eleven), but also because she’s a talented actress who has (after a quiet period largely playing supporting roles in small movies) really come into herself as an adult performer. She was a revelation as Oscar Isaac‘s city council ally in Show Me a Hero, and she’s terrific here.”

“I watched all eight hours of Stranger Things within a 24-hour period, and when I was done, I found myself hankering to go back and start over from the very beginning, something that rarely happens to me,” VanDerWerff wrote.

The star who dominated the 80s and 90s with roles ”Heathers,“ ”Reality Bites,“ ”Edward Scissorhands“ and ”Girl, Interrupted“ is back in the Netflix horror hit