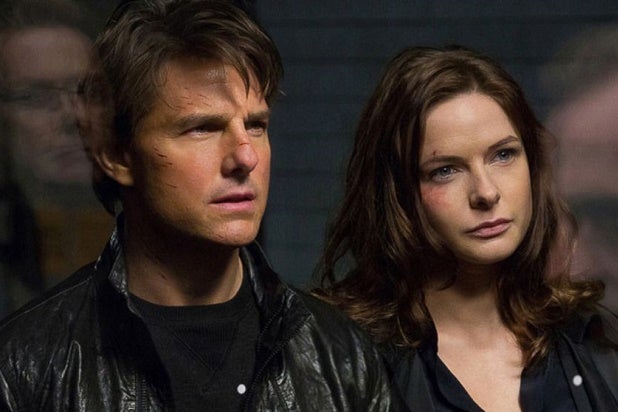 Tom Cruise is no doubt a tabloid staple but many wondered if his name still carried clout at the movies, that was until he broke out at the box office this weekend with “Mission: Impossible – Rogue Nation.”

The film’s $56 million debut was the best for Cruise since 2005’s “War of the Worlds” rolled out with $65 million. It’s also the franchise’s best since “Mission Impossible II” debuted to $57 million in 2000. And Sunday, Paramount Pictures confirmed the all-but-obvious given the big debut: there would be an “M:I-6.”

Cruise’s box-office cache had been in question after his last three action films — “Edge of Tomorrow,” “Jack Reacher” and “Oblivion” — did unspectacular business at the box office, though all were solid, especially overseas. On average, they opened to $27 million, took in $90 million domestically and $269 million at the worldwide box office.

Why did “Rogue Nation” do so much better?

“Ethan Hunt is the character Tom Cruise was meant to play,” said Rentrak’s senior media analyst Paul Dergarabedian,” and the last two films (2011’s “Ghost Protocol” was the other) have been spectacularly over-the-top popcorn movies.”

But there was more to it than the film’s star. Here are some other factors.

1. Cruise Is a Promotional Pro
No A-list actor works harder at promoting his films than Cruise, 53, and he leads by example. “He basically challenged all of us to work as hard as he did,” said Paramount’s global marketing and distribution chief Megan Colligan. “He was a producer and the star of the movie, he was involved in the writing, the shooting, the set pieces, the post-production work, calling in to check the tracking, everything,” she recalled.

After the Wednesday night world premiere at the Vienna Opera House in Austria, Cruise got right on a plane and was signing autographs for ardent fans on the red carpet at the New York premiere Thursday — hours before the rest of the team arrived.

2. The Jump to July
“Rogue Nation” was originally set for a Christmas Day release, but that meant going up against “Star Wars: The Force Awakens.” Not only would the competition make trouble, but lucrative IMAX and Premium Large Format screens would go to the Lucasfilm epic. Moving the film up five months would put tremendous pressure on the marketing campaign however, because many of the best scenes weren’t completed. Paramount Chairman Brad Grey, writer-director Chris McQuarrie and Cruise OK’d the move and Colligan’s team made it work. “Rogue Nation” certainly wouldn’t have opened to $56 million over the holidays, and IMAX and PLF screens delivered almost 30 percent of the grosses.

3. The Reviewers Were Right
The critics loved it and have the action epic at 93 percent positive on Rotten Tomatoes, the same as the previous “MI” film “Ghost Protocol.” Audiences agreed and gave an “A-” CinemaScore to the film, which co-starred Rebecca Ferguson (top, with Cruise), Jeremy Renner, Simon Pegg, Alec Baldwin and Ving Rhames. Saturday’s grosses for “Rogue Nation” were just under the $20 million that the film grossed Friday, which included the Thursday night late shows, an indicator of how positive and fast-spreading the word of mouth was.

4. The Stunts
The only recent film to come close in terms of cutting-edge and audacious stunt work is Universal’s “Furious 7.” A degree of suspended disbelief was required — hanging onto a flying jet barehanded? But action fans were more than glad to do that and enjoy stunt coordinator Wade Eastwood’s spectacular efforts. Super-size the action as many fans did at IMAX and PLF, and you really have something.

5. The Cruise Craziness
The actor’s commitment to Scientology, his dating life and divorces from Mimi Rogers, Nicole Kidman, and Katie Holmes have kept Cruise perennially on display at the checkout stand and his name in the spotlight. Those tabloid headlines may have overshadowed his other recent films, but this time, the gossip coverage — which the majority of the time included a mention of “M:I-5” — may actually have helped, Dergarabedian said.

“Cruise’s persona is also in hyper-drive and audiences seem obsessed with that and his mythology as an actor and cultural icon. All of that has resulted in a maelstrom of interest that is undeniably driven by Cruise himself.”

For the record: Brad Bird directed “Mission: Impossible – Ghost Protocol.” An earlier version of this story incorrectly said that Christopher McQuarrie had.