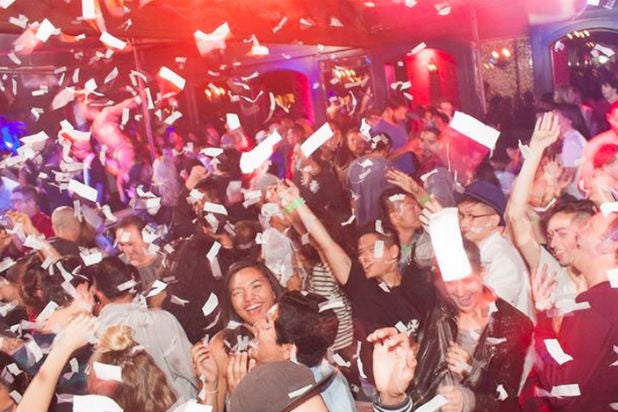 The Abbey, a widely known gay haunt for Hollywood types and locals of West Hollywood, is about to open its doors to reality show viewers across the country.

The venue, owned by ubiquitous nightlife company SBE, is currently casting among its chiseled bar staff and popular go-go boys for a nonscripted pilot, which already has a commitment from a major cable network, an individual close to the talks told TheWrap.

“Anyone could walk into The Abbey and see a sign-up sheet for casting on the office door,” the individual said, who declined to name which network is already attached to the project.

The behind-the-scenes drama of a group working in harmony to give the masses washboard abs and hangovers is plenty of source material for such a show. However, The Abbey has seen its fair share of controversy since its doors opened in 1991, giving the potential series an edge over the average workplace drama.

Here are 5 buzzy or scandalous times The Abbey has proven worthy of a reality series:

1. Banning Straight Bachelorette Parties
In 2012, Abbey founder David Cooley prohibited straight females from descending on the bar in celebration of their upcoming weddings — because homosexuals were battling fiercely for the same right.

“We’re flooded with requests from straight girls in penis hats who want to ogle our go-gos, dance with the gays and celebrate their pending nuptials. They are completely unaware that the people around them are legally prohibited from getting married,” Cooley said at the time. “I can’t wait for the day to have these parties again, when everyone can have them.”

2. Actresses Gone Wild
In 2009, actress Jamie Pressly made waves by appearing to urinate directly in front of The Abbey in the middle of the day, taking rumors of destructive behavior in her personal life from bad to worse.

The actress later clarified that she was simply taking dares from girlfriends while enjoying a bridal shower scavenger hunt: “Yes … that is me doing dare # 8 at my bridal shower,” she tweeted on her since-deleted account. “Things are not always what they seem.”

You be the judge.  And speaking of actresses …

3. Names, Names, Names, Darling.
A potential reality series could be dripping in star cameos (for those brave enough to sign the release form). Bold names like Elton John, Lady Gaga, Adele, Sarah Jessica Parker and Miley Cyrus frequent the spot when in town, and the late Elizabeth Taylor was also a regular.

Widely regarded as “the best gay bar to bring a straight friend to,” gay-friendly actors like Zac Efron, Taylor Lautner and Kellan Lutz have been spotted with pals like Lance Bass, Adam Lambert and U.S. soccer star Robbie Rogers.

4. Not All Fun and Gays: $20 Million Alleged Sexual Assault Suit
Like any high-volume business centered on vice, The Abbey is not immune to serious fallout from party culture. In 2013, a multimillion dollar lawsuit accused several employees of drugging and raping two female patrons. The alleged victims sought $20 million in total damages plus attorneys fees.

“When the incident was brought to our attention, we cooperated fully with the local police on an investigation and no criminal charges were ever filed,” the venue responded at the time. “We will continue to keep the safety of our customers and employees a top priority, as we have for the past 24 years.”

5. Fun with Discrimination: “Chick-For-Gay”
Never let it be said the gays don’t have a sense of humor. When Chik-Fil-A ignited a media firestorm for donating to a group opposing same-sex marriage rights, many local and national LGBT supporters decided to boycott the fast food chain. The Abbey, instead, beat them at their own game.

The “Chick-For-Gay” sandwich quickly popped up on the menu, replicating the signature deep-fried chicken sandwich the restaurant was famous for.