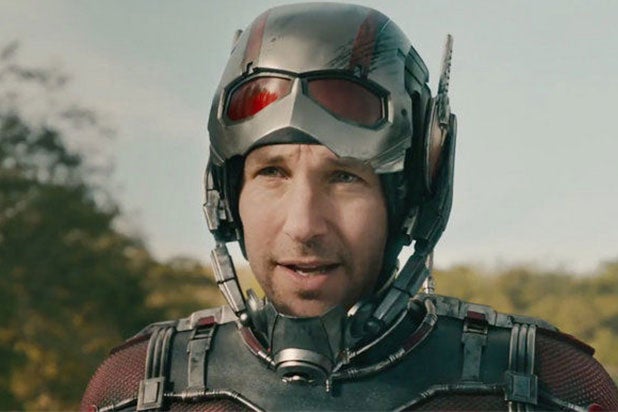 While “Ant-Man” topped the weekend box office with a $58 million domestic opening, the Paul Rudd-led superhero caper fell short of the $60 to $65 million that had been predicted.

It’s the weakest opening for a Marvel Studios production since 2008’s “The Incredible Hulk” starring Edward Norton, which debuted with a modest $55 million on its way to a tepid $134 million domestic haul. Though the studio re-cast Mark Ruffalo in the role in the “Avengers” films, another standalone “Hulk” feature is nowhere to be found on Marvel’s multi-year movie slate.

But despite the soft opening for “Ant-Man,” it may be too soon to hulk-smash Marvel’s plans for a sequel with Paul Rudd’s thief-turned-hero. Here are five reasons why:

“Ant-Man” was Marvel’s 12th consecutive opening at No. 1. True, it didn’t perform as well as Marvel’s previous movies like “Avengers: Age of Ultron,” with its $191.3 million first-weekend haul. But the movie received an “A” from moviegoers surveyed by CinemaScore, the same grade “Guardians of the Galaxy” and “Iron Man” received when they opened.

According to Rotten Tomatoes, 92 percent of the audience liked the movie. Moreover, it seems that most demographics found something in the ant-themed film, as 58 percent of Ant-Man’s crowd were men and 55 percent were over 25.

“Ant-Man” played at 3,856 North American theaters. 3D screenings brought in $16.5 million on Friday and Saturday, which was around 41 percent of the film’s entire gross for those nights.

2. A lesser-known character and a shift in genre

As Marvel expands its cinematic universe, the studio finds itself introducing increasingly unfamiliar comic book characters who may need time — or a bigger marketing push — to break out as Iron Man-size box office giants.

The opening gross for “Ant-Man” was soft, but not too short of those for other standalone Avenger movies like “Thor” ($65.7 million) and “Captain America: The First Avenger” ($65.1 million), both in 2011.

Plus, analysts and critics have noted how Paul Rudd’s more earth-bound character is a departure from the Marvel playbook and how the film itself plays down traditional superhero action pieces for more comedic material and caper plotting.

“Marvel should be commended for creating content that isn’t cookie-cutter or derivative of everything they’ve been doing,” Paul Dergarabedian, senior media analyst for Rentrak, told TheWrap. “‘Ant-Man’ is more than just a superhero movie, it’s a genre movie. It’s an action comedy. It’s different than anything they’ve done. So I don’t think anyone could have expected record-breaking numbers.”

While last year’s megahit “Guardians of the Galaxy” also had a more obscure comic-book source, the draw of a big-budget space opera had a built-in box-office appeal.

“‘Guardians of the Galaxy’ was an outer-space epic set in a fantastical world, and for the Marvel fans, they loved that,” Dergarabedian said. “Going in a different direction thematically in ‘Ant-Man’ makes it a different type of film, and with this debut, this is a really good number. It tested the waters as a different type of superhero film.”

3. Ant-Man scored for its lesser-known stars

“Ant-Man” was the biggest live-action opening ever for Paul Rudd. His previous movies include “Knocked Up,” which brought in $30.7 million on its first weekend, and “This is 40,” which only raked in $11 million.

It is also a record career bow for Michael Douglas. “Ant-Man” opened bigger than any of his previous movies: “Last Vegas” had an opening weekend of $16.3 million, “You, Me and Dupree” raked in $21.5 million, and “Wall Street: Money Never Sleeps” made $19 million.

4. The studio lowered expectations — and budgets

With a $130 million budget, “Ant-Man” cost significantly less to produce than Marvel’s other movies — roughly half of the $250 million budget “Age of Ultron.”

Dergarabedian said that the relatively low production costs didn’t give anyone an “overblown expectation” that it was going to be the next “Iron Man 3” at the box office.

“Ant-Man” opened strongly in about half of its international markets, taking in about $56 million from territories being France, Russia, Australia, Brazil, Mexico and the UK.

“This is an international play,” Dergarabedian said. “As people see the movie, it’s going to have long legs, no pun intended.”