“Captain America: The Winter Soldier” may be the only movie opening nationwide this weekend, but there are a slew of art house, independent, imports and genre films making their debuts.

They’ll be in a fraction of the nearly 4,000 theaters that Disney’s Marvel superhero sequel will screen. But these films offer counter-programming for moviegoers who aren’t fans of men in tights. While most are in limited release, several are already available or will be on video-on-demand or for download.

Here are a handful of the more intriguing alternative entries:

“Frankie and Alice”
If this drama starring Halle Berry as a 1970s L.A. go-go dancer struggling to cope with multiple personality disorder sounds familiar, you were paying attention during the 2010 awards season.

That’s when the drama, which features Berry as a woman with a 7-year-old and a white supremacist as alter egos, received a brief awards-qualifying run. Berry was nominated for a Golden Globe, but its backers ran into financial problems and “Frankie and Alice” was never released beyond that. Lionsgate’s Codeblack, which picked it up last year, is opening it this weekend in 125 theaters. Stellan Skarsgard, Phylicia Rashad and Chandra Wilson co-star in the film, which is directed by Geoffrey Sax.

“Dom Hemingway”
This British import stars Jude Law as a larger-than-life safecracker with a loose fuse. Back on the streets of London after 12 years in prison, he sets out to collect what he is owed for keeping his mouth shut but winds reconnecting with his daughter (Emilia Clarke).

It’s written and directed by Richard Shephard, who won an Emmy for directing “Ugly Betty.” Fox Searchlight opened the dark comedy, which co-stars Richard E. Grant and Demian Bichir, in the Angelika and Lincoln Square theaters in New York and the ArcLight and Landmark in L.A. on Wednesday. 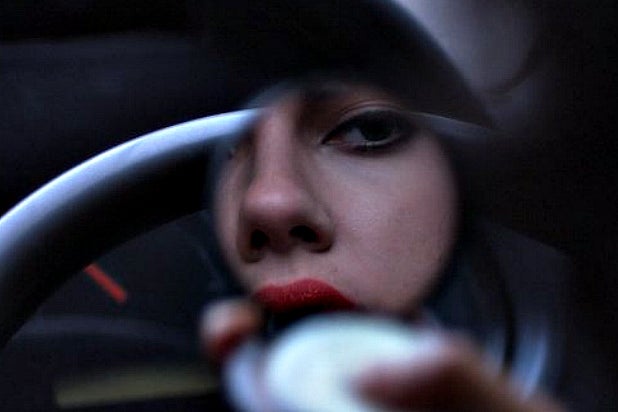 “Under the Skin”
This spooky thriller, which stars Scarlett Johansson as a gorgeous but man-eating alien on the loose in Scotland, will debut in four theaters via distributor A24.

Also read: Scarlett Johansson Gets Undressed in ‘Under the Skin’ Trailer (Video)

It’s directed by Jonathan Glazer (“Sexy Beast”), who teamed with Walter Campbell to adapt Michael Faber’s 2000 novel of the same name. The sci-fi tale, which screened at the film festivals in Toronto and Venice, has a strong 87 percent positive rating on Rotten Tomatoes.

“Afflicted”
Derek Lee and Clif Prowse wrote, directed and star in this micro-budgeted found-footage horror thriller, opening in 44 theaters, that was filmed in France, Spain and Italy.

They play buddies who go on a globe-trotting adventure until Derek has a bloody encounter with a woman and subsequently goes through a monstrous transformation. It swept best picture, screenplay and director honors for horror at the last Fantastic Fest, and has a strong 89 percent “fresh” rating on Rotten Tomatoes. It’s CBS Films’ first day-and-date digital/limited release.

“Alan Partridge: The Movie”
Steve Coogan, recently seen in and nominated for an adapted screenplay Oscar for “Philomena,” is back as his politically incorrect alter ego in this comedy.

Originally titled “Alan Partridge: Alpha Papa,” it follows the events that transpire when the awkward U.K. deejay’s radio station is taken over by a new media conglomerate. Declan Lowney directs. Magnolia Pictures is debuting it in four theaters, but it’s available digitally and on VOD.

“The Players”
Jean Dujardin and Gilles Lellouche star in, wrote and directed this comedy collection of eight segments addressing cheating men. Michel Hazanavicius, who teamed with Dujardin on “The Artist,” also directed a vignette. The posters for the film — which depicted Dujardin gripping a pair of female legs — drew fire from French advertising regulators and created a stir during the 2012 Oscar race. The Weinstein Company will have it in roughly 50 theaters on Friday.

“Island of Lemurs: Madagascar”
They may not be as popular as zombies or vampires, but lemurs have had their movie moments, from  “Life of Pi” to the animated “Madagascar.” They’re the stars in this 40-minute, family-friendly 3D documentary that follows Dr. Patricia C. Wright’s mission to save the creatures, which arrived on the island millions of years ago and are now endangered. Morgan Freeman narrates the Warner Bros. release.