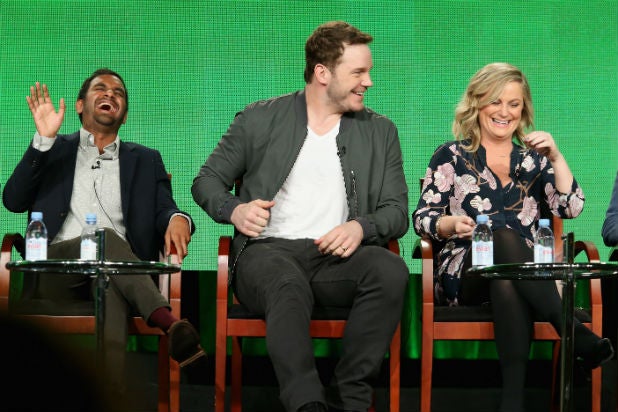 While dedicated fans to NBC’s “Parks and Recreation” will miss the quirky staff in Pawnee, its probably nowhere near how close star Amy Poehler feels about letting go of Leslie Knope.

“What I’ll miss the most is what will happen to Leslie next year. I’m going to really miss that. Maybe we should make it up,” Poehler said during Friday’s Television Critics Association press tour in Pasadena.

As the show continues in its seventh and final and season, the crew gave reporters a glimpse at what to expect:

1. Chris Pratt is not leaving, even when the show goes off
When castmembers were asked if their growing work schedules may have prompted thoughts of leaving the show, many gave a simple no. But, “Guardians of the Galaxy” actor Chris Pratt was especially emphatic.

“It’s funny you would ask that because it never once occurred to me. That would never happen. I would never fucking ever leave this show,” Pratt exclaimed.

2. Paul Rudd returns
Leslie’s former adversary for a city council seat, Bobby Newport, is back. Fans last saw Newport on Season 4 when he ran an unsuccessful campaign against Leslie. Rudd managed to make time to film two episodes while preparing for this summer’s “Ant-Man.”

3. Breathe easy, no one dies
Fans can exhale as Schur revealed no castmembers are getting the axe on the final season.

“Everyone is there at the end. The last moments of the show are everybody in the same place,” Schur said.

“We do say goodbye to some of the people in the town, some ancillary characters. A lot get to say goodbye in different ways, by leaving or dying,” Poehler joked.

4. “Easter” comes early
As in the form of hidden gems, not the actual holiday. Schur said that dedicated fans of the show should keep a close eye on the not-so-major events.

“What’s important is to keep those things in the margins a little bit, make them more ‘Easter eggy’ and like little hidden treats,” he said.

Also read: Nick Offerman, ‘Somebody Up There Likes Me’ Big in Chicago

5. Poehler and Schur will team on…

Yes, a new series that Schur let Poehler reveal the details on. “We’re filming a show where you watch with the back of your eyelids while walking down the street,” Poehler joked.

“We call it walk and watch,” Poehler explained.

But seriously, ABC Entertainment chairman Robert Greenblatt said that the network is continuing to work with Poehler and Schur on new projects. Plus, the invitation extends to everyone on the show.

From the red carpet to three-time hosts Tina Fey and Amy Poehler, the 2015 NBC live broadcast had moments we’ll remember forever, and some we’d like to forget

BEST
George and Amal Clooney: Red Carpet Perfection
George and Amal Clooney were the ultimate couple at the Golden Globes red carpet; it was the couple's first big appearance since getting hitched four months ago. Amal wore a custom black Dior gown, which she paired with her own long white opera gloves. Her newly-minted husband put all men to shame with his tuxedo.