50 Cent thinks he knows why “Empire’s” ratings dipped in its second episode of the season — too much “gay stuff.”

In an Instagram post (see below), that has since been deleted, Fifty shared a page called @industryonblast_ that said the Fox show’s ratings fell because of too many celebrity cameos and “gay” plots.

“There are 3 million less viewers who tuned into last night’s Empire episode!!!! did you watch it?” the post said. “We could not take the extra gay stuff or celebrity stuff last night!!!!”

Curtis “50 Cent” Jackson chimed in with his own commentary by urging Taraji P. Henson‘s “Empire” character to call him for help.

Also Read: 50 Cent Testifies That His Flashy Lifestyle Is an Illusion 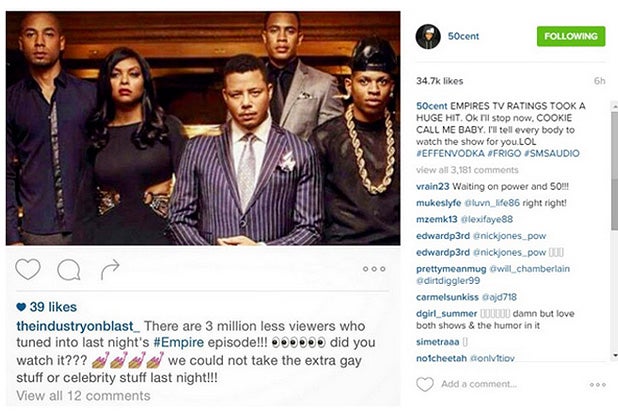 On Monday, a representative for 50 Cent released the following statement: “Mr. Jackson reposted something on Instagram that originated from a blog in relation to the decrease in ‘Empire’s’ ratings. When he realized there was additional content in the blog post that he did not agree with, he immediately deleted the post as that is not a reflection of his views at all.”

As TheWrap previously reported, “Empire” attracted a massive 16 million viewers during its premiere last week. But the ratings dipped on Wednesday night to 13.7 million viewers. While those are still huge numbers, 50 Cent has a long-running spat with “Empire” and jumped at the chance to gloat.

The rapper, who in the past has accused the Fox series of copying the promotional campaign of his Starz drama “Power,” mocked “Empire” on Instagram after it took a dig at him in its Season 2 premiere.

The “Get Rich or Die Tryin'” rapper fired back in a video post saying, “I can’t believe Cookie would say some shit like that about me. Thirsty? Me? Thirsty? Come on.”