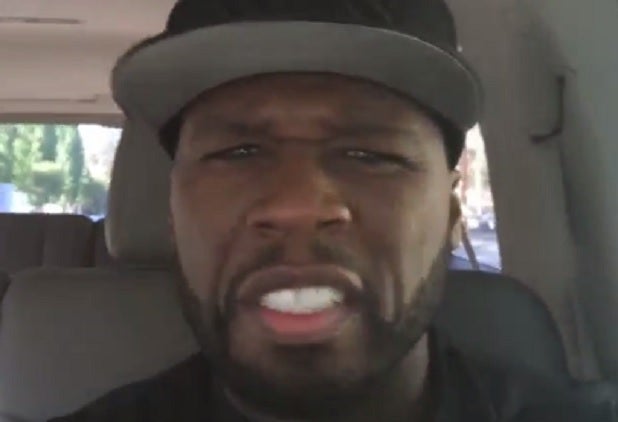 If you didn’t think 50 Cent would weigh in on Conor McGregor’s reported bus-bashing incident this week, you clearly haven’t been following the chilly history between the “Get Rich or Die Tryin'” rapper and the quick-tempered mixed martial artist.

On Friday, 50 Cent offered his two bits on McGregor’s reported attack on other mixed martial arts fighters — and he enlisted Britney Spears to do so, though she probably wasn’t aware of it.

In an Instagram post Friday, 50 Cent posted an infamous photo of Spears attacking a paparazzo’s car with an umbrella in 2007, with one crucial difference — McGregor’s mug was slapped on top of Spears’ body in place of the singer’s then-bald dome.

“Good morning people … is that you Britney,” the rapper captioned the photo.

McGregor was taken into police custody on Thursday after he was filmed committing an attack on other fighters in Brooklyn, New York.

Earlier in the day, McGregor and an entourage rushed into a non-public area of Brooklyn’s Barclays Center, and began throwing objects at a bus carrying several other MMA fighters who are set to duke it out Saturday at UFC 223. The fighters had just finished a pre-fight press conference.

Part of the melee was captured on video and widely shared on social media soon after. In the clip, someone can be seen throwing a chair into a window. Another person, believed to be McGregor himself, was restrained while apparently attempting to do the same thing. Other people threw smaller objects at the bus.

MMA fighter Michael Chiesa sustained injuries to his face in the fracas, according to ESPN’s Brett Okamoto. Chiesa was scheduled to fight former lightweight champion Anthony Pettis during the pay-per-view event, but has since confirmed that his fight with Pettis has been canceled.

Dana White confirmed Michael Chiesa suffered an injury, cuts to the face, and is in the hospital. Artem Lobov has been pulled from UFC 223, per White, as he was apparently part of the crew that stormed the building.

This is far from the first time that digs have occurred between 50 Cent and Conor McGregor. In July 2017, as McGregor prepared  for a bout against boxer Floyd Mayweather Jr., the rapper took a shot at McGregor on Instagram, posting a picture of a little person in boxing gear, bearing the text, “I don’t know champ, Conor McGregor looks like he means business.”

See the latest social-media ribbing below.