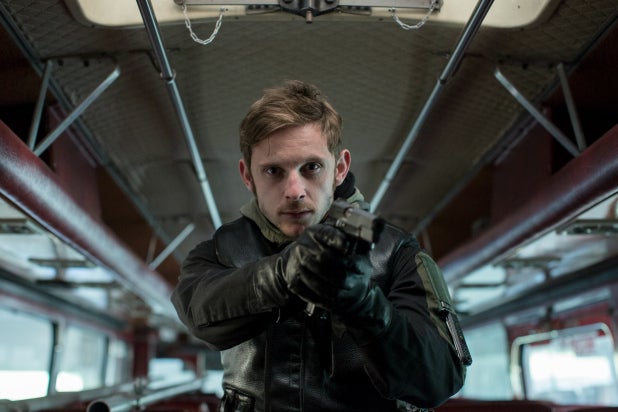 Limply following in the footsteps of “Munich,” “Zero Dark Thirty” and “Argo” is the terrorist hostage thriller “6 Days,” a dramatization of the Iranian embassy crisis that gripped the UK in the spring of 1980. The core ingredients are all there for an absorbing rehashing of events but, as unveiled — even with a solid cast that includes Jamie Bell in paramilitary gear, Mark Strong turning up the gravity in his voice, and Abbie Cornish as a BBC reporter — it comes off all too often like a routine siege picture with a testosterone insecurity.

You don’t need to be a student of history to appreciate the many tense elements in play when six armed Iranian Arabs stormed their country’s embassy in London and took over two dozen people hostage to protest Persian treatment of their minority in Iran. By that point, the US-Tehran hostage situation had been going on for months, and Margaret Thatcher — newly in power as Prime Minister — was eager to show British strength in the face of rising terrorism (both the Middle East and IRA kind).

While some preferred the idea of careful negotiation with the hostage takers, plans were also in place to launch an assault using Britain’s special forces. On top of that, news teams were camped outside to make sure anything that happened, good or bad, was seen by millions.

So why does New Zealand-by-way-of-England director Toa Fraser’s version of events, as scripted by Glenn Standring — a reteaming of the pair behind the Maori adventure saga “The Dead Lands” — feel so inconsequential and stiff? The main answer is that it’s confused about whether it wants to be a ticking-bomb tale of heroics or a complex insider account.

Fraser winds up with neither, unable to make phone conversations between Strong’s serious-minded police negotiator and the terrorists feel any different from an exchange you’d hear on a TV cop show, and so worried you’ll be bored (as marker “DAY 1” becomes “DAY 2” and so on) that he treats the SAS (Special Air Services) rehearsals for storming the embassy like action scenes in and of themselves. Sorry, but anyone fooled into a quickening heart rate by pretend-raids on a makeshift embassy set in a hangar is truly starved for excitement.

The problems start early. “6 Days” can’t be bothered with threading names and locations into expository scenes — too hard! — so it sets everything up the information-overload way, with the real-life players’ names and job descriptions spelled out for us with captions. (No such tags for the baddies, however; maybe it would have looked silly to see “Salim: Terrorist.”)

Then, when the places get identified with onscreen titles, (a briefing room for government bigwigs, the Royal College of General Practitioners) we also for some reason get their geographic relation to the Iranian embassy. (In case you need to know exactly how many doors down the authorities’ makeshift headquarters was from the embassy, it’s seven.)

Fraser admirably tries to kick-start the severity of the crisis right away, even if the tendency to be stylish trumps a lived-in period flavor. But even with a situation whose nerviness is baked in, it’s surprising how little suspense is generated, even with real-life details like a cop hostage harboring a weapon the gunmen don’t know about, or the constant worry that the terrorists — regrettably ill-defined as characters, mostly seen shouting or demanding — will start killing their captives. Maybe that’s because the title gives away when the special forces intervene. (Hint: it’s after “DAY 5.”)

The raid, meanwhile, is perfunctorily filmed, and an attempt to create an anticipated showdown between Bell’s gung-ho SAS operative Rusty Firmin and head terrorist Faisal (Aymen Hamdouchi, “War Machine”), set up only with an earlier scene in which Rusty stares intently at Faisal’s mug shot, feels woefully forced.

The performances, outside of Strong’s hyper-aware sensitivity as police inspector Max Vernon, barely register — and in the case of Cornish, whose newswoman cadence playing real-life correspondent Kate Adie is alarmingly stilted, come dangerously close to terrible. (I’d be surprised if Adie, who became a star because of her live reporting, isn’t offended by the cynical “I’ve got a scoop” smirk Cornish brazenly wears for much of the film.)

Bell’s SAS character Rusty, meanwhile, feels generic, and is stuck in a loop of waiting with his squad members for the go signal and doing practice drills. It may be reality, but it sure isn’t gripping as docudrama.

When you think of how skillfully the likes of Steven Spielberg, Ben Affleck and Kathryn Bigelow squeezed all they could from their politically charged, naturally pulsing tales of counter-terrorist action, you can’t help but view “6 Days” as a missed opportunity.