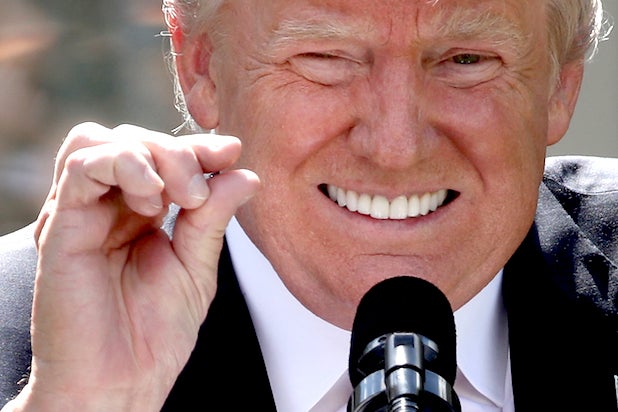 Fox News and a Donald Trump supporter worked together to fabricate a story about the details surrounding the murder of former Democratic National Committee aide Seth Rich in order to distract viewers from growing concerns over the White House’s ties to Russia, according to claims made in a new lawsuit that has been obtained by TheWrap.

Longtime contributor Rod Wheeler filed the lawsuit against Fox News Channel on Tuesday in the Southern District of New York. Wheeler said in the legal filing that Fox News and Trump supporter Ed Butowsky sought to shift public attention away from Russia and fabricated quotes to help the narrative.

Rich was murdered last year in what police called a botched robbery attempt, but multiple conspiracy theorist have attempted to tie him to WikiLeaks and the DNC email hack. The explosive suit features accusations on everything from the president demanding that a story be published “immediately” to claims of racial discrimination at Fox News. Here are the six juiciest accusations in the lawsuit:

The lawsuit includes a text message and voicemail allegedly sent from wealthy Trump supporter Ed Butowsky to Wheeler. The suit says that Trump was given a copy of the Fox News story before it was published and liked what he read.

“Not to add any more pressure but the president just read the article. He wants the article out immediately. It’s not all up to you. But don’t feel the pressure,” Butowsky texted Wheeler, according to the suit, which was obtained by TheWrap.

The “president” referred to in the text message is Trump, the suit says.

“Incredibly, according to Butowsky, the President reviewed an article written by a Fox News journalist prior to its publication,” the suit says. However, Butowsky told NPR, which first obtained the suit, he was only kidding about Trump’s involvement.

The suit says that an article by reporter Malia Zimmerman was published to “establish that Seth Rich provided WikiLeaks with the DNC emails to shift the blame from Russia.” Fox News eventually retracted the story about Rich, saying it did not meet the network’s “high degree of editorial scrutiny.”

According to the suit, Zimmerman fabricated two quotes attributed to Wheeler, with the knowledge and support of Butowsky.

“My investigation up to this point shows there was some degree of email exchange between Seth Rich and Wikileaks,” Wheeler was reported to say in the retracted story.

My investigation shows someone within the DC government, Democratic National Committee or Clinton team is blocking the murder investigation from going forward… That is unfortunate. Seth Rich’s murder is unsolved as a result of that,” Wheeler was also reported to say.

The suit says Wheeler did not make either statement.

3. Wheeler accuses Fox News of racial discrimination in the lawsuit

Buried at the end of the 33-page lawsuit is a section that accuses Fox news Channel of racial discrimination against Wheeler.

“Mr. Wheeler, who is Black, was hired by Fox as a contributor in 2005. Mr. Wheeler is not a full time employee and, as such, is paid a set amount for each appearance he makes on Fox programming rather than a set salary. Further, Mr. Wheeler is not provided benefits by Fox,” the suit says. “Throughout his career with Fox, Mr. Wheeler’s white colleagues with comparable or inferior skills, expertise and experience have received more air time, made more appearances and been hired into full time positions. As a result, these white colleagues make more money, receive more notoriety and, in many cases, receive valuable benefits.”

America’s favorite former press secretary is mentioned in the lawsuit and he even admits to meeting with Butowsky. Spicer told NPR that he met with Butowsky, but only as a “favor” to the prominent GOP donor and said he was unaware if Trump had any contact.

However, the lawsuit says Butowsky “is a friend to Spicer.” The suit says that prior to President Trump saying he wanted the story out immediately,” Wheeler met with Spicer and provided him with a copy of his investigative notes.

Wheeler has “lost all credibility in the eyes of the public” and “suffered irreparable damage to his reputation,” according to the suit.

“Fox did not clear Mr. Wheeler’s name and never admitted that Zimmerman had misquoted him. As such, Mr. Wheeler requested and attended a meeting with Dianne Brandi, Fox News’s Executive Vice President, Legal and Business Affairs, and Jay Wallace, Fox News’s Executive Vice President of News and Editorial,” the suit says. “Wheeler explained to Ms. Brandi and Mr. Wallace that he had not provided Zimmerman with the quotations she used in her article. He also informed Ms. Brandi and Mr. Wallace that Zimmerman had admitted that Mr. Wheeler had not provided her the information regarding WikiLeaks that she attributed to him in the article. Nevertheless, to this day Fox has not issued any statement admitting that the quotes attributed to Mr. Wheeler were not made by him, nor has Fox apologized to Mr. Wheeler.”

Fox News president Jay Wallace provided the following statement to TheWrap: “The accusation that FoxNews.com published Malia Zimmerman’s story to help detract from coverage of the Russia collusion issue is completely erroneous. The retraction of this story is still being investigated internally and we have no evidence that Rod Wheeler was misquoted by Zimmerman. Additionally, FOX News vehemently denies the race discrimination claims in the lawsuit — the dispute between Zimmerman and Rod Wheeler has nothing to do with race.”