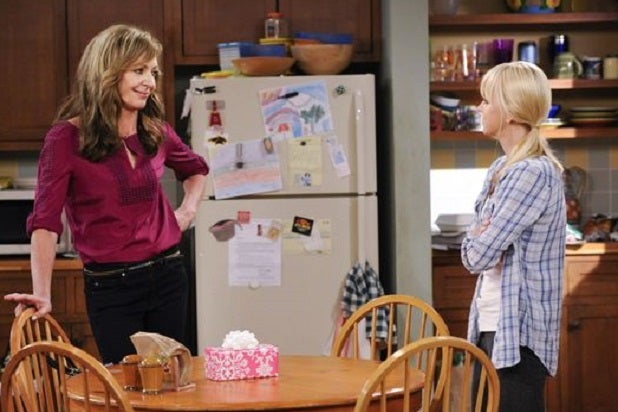 With Emmy nominations for her role as matriach Bonnie on the freshman CBS comedy “Mom,” and for her guest role on the drama “Masters of Sex,” “The West Wing” alum Allison Janney spoke to TheWrap about the joys of aging prosthetically and her “Downton Abbey” dream role.

What was the toughest thing you had to do this season?
The hardest thing was getting used to show’s night tapings in front of a live studio audience. As a performer I’ve rehearsed plays and put the finished product up in front of an audience.  In a half-hour comedy, you show the audience the rehearsal — all your mess-ups, your bad takes — they see everything warts and all. It was hard for me to let go of that desire to be perfect.

What was the most fun thing you had to do this season?
I really enjoyed the episode when Anna and I had to go through the prosthetic makeup process to age ourselves … it was a lot of fun. And I gotta say, old Janney didn’t look so bad.

Let’s assume that somebody has never seen your show. What would you say to persuade them to watch it?
If you like good acting and stories that revolve around strong family relationships and real life issues all told with a boat load of humor and heart, then “Mom” is for you.

You’re an Emmy voter. You can’t vote for yourself or your show. Who’s at the top of your ballot?
I would vote for “Masters of Sex” [which Janney also appeared on last year] across the board.

If you could play any other role on any other show, what would it be?
I would want to jump into “Downton Abbey” as Shirley MacLaine‘s illegitimate daughter.

What was the last TV show you binge-watched? How many episodes did you see in a sitting?
BBC’s “Call the Midwife” with Miranda Hart. I watched six on my flight back from London.