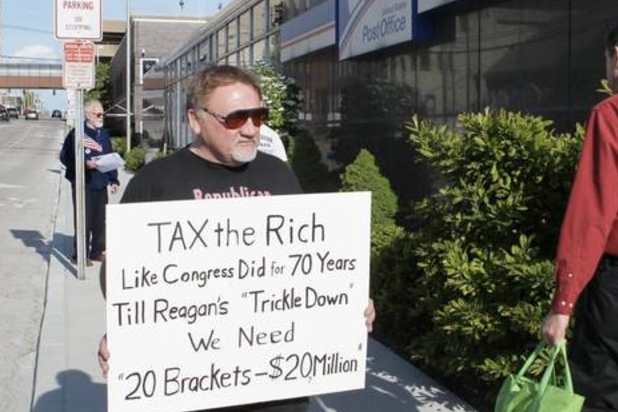 Image of James T. Hodgkinson (from the Belleville News-Democrat)

James T. Hodgkinson, who shot House Majority Whip Steve Scalise and others Wednesday morning, had a history of run-ins with police and criticizing Republicans — including Scalise specifically.

Hodgkinson was shot and killed by law enforcement officers in Alexandria, Virginia, during the attack, President Donald Trump announced during a televised appearance.

Police are investigating possible motives of the 66-year-old from Belleville, Illinois. But public records and statements suggest he had particular antipathy for Republicans, which may explain why he attacked Republican lawmakers practicing for a Congressional baseball game.

Here are seven things we know about Hodgkinson:

A Facebook page that appears to be his includes a March 22 post that declares “Trump is a Traitor” and adds “Trump Has Destroyed Our Democracy. It’s Time to Destroy Trump & Co.”

According to the Belleville News-Democrat, his local newspaper, a post appeared on Hodgkinson’s Facebook page two days ago that read: “I Want to Say Mr. President, for being an a– hole you are Truly the Biggest A– Hole We Have Ever Had in the Oval Office.”

The social media page displays a cover photo of former Democratic presidential candidate Bernie Sanders. His profile picture displays an American flag emblazoned with the text: “Democratic Socialism explained in 3 words: ‘We the People’… Since 1776.” The Washington Post reported that Hodgkinson supported  Sanders in Iowa during the Vermont senator’s 2016 presidential bid.

On May 24, Hodgkinson sought signatures for a Change.org petition that called for the Federal Energy Regulatory Commission to stop the NEXUS pipeline. He also shared a post of a petition he signed on May 21, titled, “George H.W. Bush: Past Presidents Urge Congress to Launch Independent Investigation.”

Heavy said one post from October 2015 (which no longer appears) stated: “Thieving Republican Congress Strikes Again!!!” It appeared along with a Matt Davies comic that disparaged Republicans.

Hodgkinson also wrote several letters to the editor of the Belleville News-Democrat, the paper reports — many of which expressed his frustration with the Republican party, tax policies, along with his advocacy for legalizing marijuana. “We need to bring our country out of today’s recession by raising the number of tax brackets from six to 20 or more and the top marginal rate of 35 percent on $380,000 to 60 percent on $20 million or more,” one of Hodgkinson’s letters read. It went on: “In 1938 we had 33 brackets from 4 percent for most of the country to 79 percent for income over $79 million. I believe anything near these rates would be fair and balanced. In rebuttal: I have never said ‘life sucks,’ only the policies of the Republicans.”

The Facebook page includes one posts from 2015 that criticized Rep. Steve Scalise specifically, according to Heavy. It read: “Here’s a Republican that should Lose His Job, but they Gave Him a Raise.” The cartoon shows Scalise speaking before a group of hooded KKK members, which references a 2014 report that the congressman had spoken before a white supremacist group. The caption read: “When I spoke to a racist group in 2002 it was an innocent mistake. I had no idea who they were. I couldn’t see their faces.”

Also Read: Hollywood Reacts to Virginia Shooting: 'Please Congress, What Will It Take for You to Act?'

Hodgkinson owned a home-inspection business but his license expired in November 2016 and was not renewed, according to state records obtained by the Washington Post. The Facebook page said Hodgkinson was a Belleville, Illinois, native and owned a company, JTH Inspections, also called JTH Construction. The page reflects that he studied at Southern Illinois University-Edwardsville.

The paper also reported that Hodgkinson was charged with battery and aiding damage to a motor vehicle in April 2006 in St. Clair County, Illinois. Those charges were subsequently dismissed. The Belleville News-Democrat reports his record also included charges for failing to obtain electrical permits, damaging a motor vehicle, resisting a police officer, eluding police, critical damage to property, driving under the influence and traffic offenses.

The shooting in Alexandria, Va., located just outside of Washington, D.C., is being investigated as a criminal act rather than an act of terrorism, according to the Associated Press.

Five people were taken to area hospitals, including the gunman. A Capitol Hill aide and a female police officer were also shot, according to Fox News. Another police officer was also injured by fragments, the network reported.

Scalise was shot in the hip and underwent surgery. Republican Sen. Rand Paul of Kentucky told Fox News “it would have been a massacre” if not for Capitol Hill Police who were present as part of Scalise’s security detail.

“We had no defense at all,” Paul said. “We are so lucky they were there. They saved everybody’s life.”

Scalise and several other GOP leaders and staff members were practicing for a bipartisan Congressional baseball game scheduled for Thursday evening. The lighthearted game is an annual tradition that raises money for local charities. The team was taking batting practice when the shooting began.

Scalise was standing on second base when he was shot, according to Rep. Mike Bishop, who spoke to a radio station in Detroit.

“I was looking right at him,” Bishop said. “He was a sitting duck.”

Rep. Mark Walker told NBC that the “gunman was there to kill as many Republican members as possible” but no official motive has been announced. President Trump took to Twitter shortly after the incident, offering prayers for “true friend and patriot” Scalise and saying he will “fully recover.”