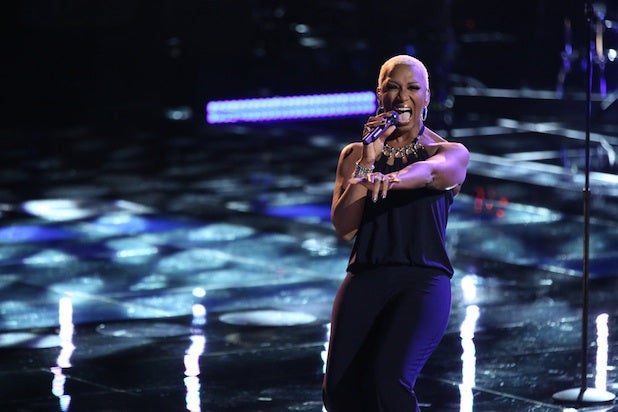 NBC’s “The Voice” was eventful this week. The last of Battles: Round 2 aired Monday, and the Playoffs started Tuesday, whittling coach Blake Shelton’s Top 5 down to a Top 3. The premise of the Playoffs is that the contestants perform for a studio audience, but the decision of who will stay and who will go belongs to the coach. Now, let’s hunker down with some cheese dip and score cards and talk the latest episodes of “The Voice.”

Battles: Round 2 ended with a whimper (not a bang) as viewers continued to suffer from battle fatigue. In a surprise twist, Team Shakira’s Dani Moz won her battle against Clarissa Serna, sending the former front-runner home. Adam Levine lost his mind and pitted Dawn and Hawkes against the indomitable Kat Perkins, sending my favorite duo back to their porch swing. Team Usher’s Bria Kelly and Madilyn Page made for one of the oddest pairings yet, and Bria won (leaving Madilyn open for a steal via Blake). Team Adam’s Brittnee Camelle and Jake Barker channeled their inner Usher, and Usher won. Chris Martin sparkled, and some other things happened.

1. Flying with Broken Wings
Team Blake kicked off with “Broken Wings” from country singer Audra McLaughlin. Audra has delivered solid performances all season, and this was no exception. She started flawlessly and remained on point the whole way through, building up to some great final notes. Anyone familiar with Martina McBride knows this tune is a lung buster, so it’s especially impressive that Audra navigated it so effortlessly.

2. No Second Chances
Ryan Whyte Maloney inexplicably picked “Second Chances” as his selection, a song that sounds more dated than it should. In rehearsals, Blake seemed concerned that he’d be able to nail some of the higher notes, but Ryan was able to do a pretty successful job of that in his performance. The more telling issue was his trouble singing the verses with finesse (when he wasn’t yelling in his upper range, it was a bit shaky). In a round where there are no more second chances, I don’t know that “Second Chances” was the right choice for Ryan.

3. Bro-vorce
Usher laid a bit of flattery on Adam this week after Ryan’s performance, telling Ryan that Adam was the only other guy he knew who could hold notes like that. Adam was so moved by Usher’s compliments, he started doubting his bromance with Blake, playfully calling for the possibility of a “brovorce.” The crowd laughed, while Blake cried inside.

4. You are 16 going on 17….
I’ve said this before, and I’ll say it again. I have no idea how anyone can handle the stress of this competition at the tender age of 16, so I have to give Madilyn Paige a ton of credit for doing it with such grace and poise. That being said, “Clarity” was not an ideal song choice. The verses were lovely, but the chorus was clearly out of her comfort zone, and she couldn’t fully relax into the song, at times looking like a deer in headlights. I have to wonder how differently this performance would have gone if she’d done something more in her wheelhouse. Yes, risks are good, but sometimes baby steps are better (especially for 16 year-olds).

5. Jacked up on Mountain Dew
There is something irresistible about Jake Worthington. It could be the thick, Southern drawl that’s sometimes hard to decipher or the hilarious one-liners like “she’s the only girl that could treat me like a skinny guy.” It could also be his genuinely impressive country voice. Jake made a strong case for himself this week with “Anywhere With You,” commanding the stage during his performance and then further delighting the crowd with his disarmingly honest and funny responses to the coaches. “Shake and Blake” is definitely one of the great coach/contestant pairings of the season.

6. The student has always been the teacher…
Anyone who reads this blog knows I am a huge Sisaundra Lewis fan, so I was a touch concerned with her song choice “New York State of Mind.” It seemed like an odd selection – a little too subdued and jazzy to truly show off her voice. However, my worry was in vain. Once she stepped out from behind the mic stand halfway through, she tore through the song like it was a spiritual experience, hitting crazy notes and creating moments that made everyone’s hair stand on end. The coaches seemed to be in shock afterwards, admitting that she was really there to teach them, not the other way around. Amen to that.

7. Funniest line
When Usher asked Sisaundra if Blake ever tried any vocal runs, Blake responded, “Where I come from, having the runs is a bad thing.” Touche, Blake. Touche.

Also read: 10 Best and Worst Moments of ‘The Voice’ Battles Round 2 (Guest Blog)

8. And then there were three…
Soft-hearted Blake was obviously dreading making a final decision, but he finally pulled himself together enough to pick Sisaundra, Audra, and, after much ado, Jake (eliminating Ryan and Madilyn from the competition).

Did you agree or disagree with Blake’s Playoff decisions? Are you as thrilled as I am to be done with battles? Leave your thoughts in the comments!

If you’re in the L.A. area, join us for a show at The Hotel Café tomorrow night, Thursday, April 10 – tickets available here!). And don’t forget to check out my album “In & Out of the Dark,” available on iTunes NOW. For more updates, follow me on Twitter: @katrinapmusic and visit my website, www.katrinaparker.com.