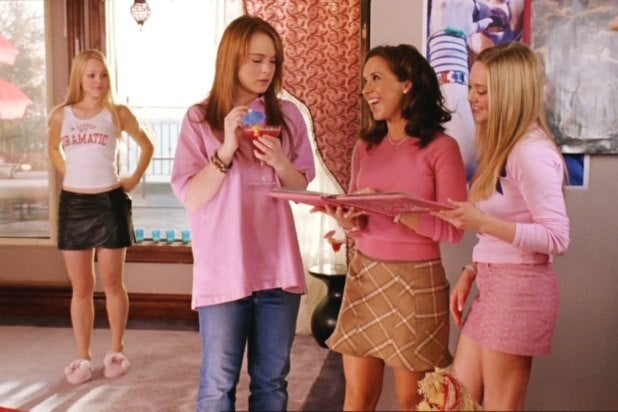 Over a decade after their movie debuted in theaters and became an instant comedy classic, the cast of “Mean Girls” was reunited once again in 2014 for an Entertainment Weekly photo shoot.

The stars of the film, Lindsay Lohan, Tina Fey, Rachel McAdams, Amanda Seyfried and Lacey Chabert, were dressed like true Plastics in heels and high-end threads for the reunion.

The women then sat down to share stories about what went down on the set, including never-before-revealed details about the movie.

Fans of the 2004 film will be crushed to know just how close they came to seeing a “Mean Girls” sequel or who Fey had in mind originally to play Cady Heron.

TheWrap has assembled nine revelations the ladies divulged during their interviews below.

1. Tina Fey now regrets not doing a “Mean Girls” sequel
“At the time we did want to start the conversation about the sequel, and for whatever reason I was like, ‘No!!! We shouldn’t do that!'” Fey said. “Now I look back and I’m like, ‘Why?’ But now, no — it’s too late.”

2. Lindsay Lohan wanted to be Regina George, Rachel McAdams auditioned for Cady and Amanda Seyfried was just happy to get cast
Lohan admitted that she went to war with director Mark Waters over giving her the part of Plastic Queen Regina, saying: “I was still 17 years old and I wanted to be the cool girl on set.” The part eventually went to McAdams, even though she had auditioned to play Cady Heron. When Seyfried got the part of Karen Smith, she was just relieved to have any role in the film.

“I just wanted to be in the movie. To be asked to play Karen, I was like, ‘Great! Whatever!'” Seyfried says.

3. Tina Fey had to be convinced that Lindsay Lohan was right for the part of Cady
“At some point I was like, “Oh, should Lindsay be Regina?” Fey said. “And then Mark and Lorne [Michaels] had the good sense to say, ‘No, she gets to turn into Regina.’ You work backward from that and you cast her as Cady, knowing she could get to that point of being Regina, but you let her be the innocent side, too.”

4. How did they get Amy Poehler’s pet Chihuahua in the film to nibble on her nipples?
“They, like, pinned a piece of a cocktail wiener into her bra,” McAdams said. “I thought this dog was going to tear her apart. It was very effective.”

5. Mariah Carey loves “Mean Girls” and tells Lindsay Lohan about it all the time
“Mariah and I have the same makeup artist,” Lohan said. “Whenever I see her, she does always say, ‘On Wednesdays, I wear pink.’ She loves that movie.

6. Glenn Cocco is a real person
“I tried to use real names in writing because it’s just easier” Fey said about writing the script. “My older brother’s good friend is Glenn Cocco. He’s a film editor in Los Angeles, and I imagine it’s a pain in the butt for him. Someone said to me you could buy a shirt at Target that says ‘You go, Glenn Cocco!’ That was unexpected.”

Also read: Hilary Duff Is Down for More ‘Lizzie McGuire': ‘Why Not?’

8. Tina Fey was driven in a Winnebago from “SNL” in New York to the “Mean Girls” set in Toronto
“I don’t remember if I was weird about flying or if it was the timing, but sometimes I would go do ‘SNL,’ then I would get in a Winnebago at two in the morning and be driven to Toronto,” Fey said. “It’s so stupid.”

9. Lacey Chabert’s character Gretchen Wieners was supposed to be thin and gangly
“I thought I was really wrong for Gretchen,” Chabert said. “The character description physically was very different from me.”