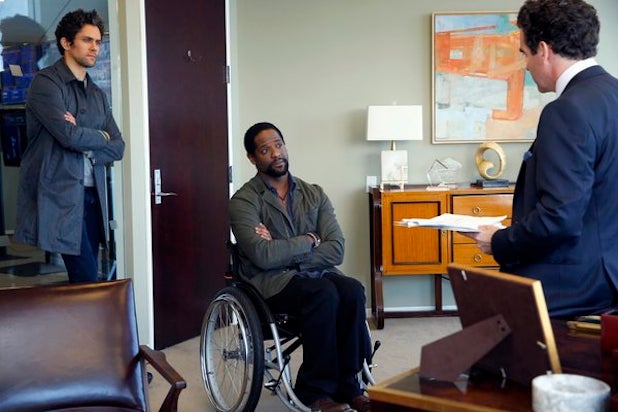 “Are you really a cripple?” a suspect asks Ironside at the start of the new series named after him.

No, he’s not — nor is he kidding anyone with this.

When NBC decided to reboot the 1960s series “Ironside,” I had high hopes. I grew up using a wheel chair, having been born with severe Spina Bifida. The iconic wheel-chaired TV sleuth was the only disabled character offered by the three major networks.

The illusion was never real because I knew that actor Raymond Burr was not disabled in reality. But I hoped the new Ironside might be.

So imagine the severe disappointment to learn that “L.A. Law” star Blair Underwood would reprise the role. Like Burr, Underwood is also an able-bodied actor in role that might have been offered to an actor with an actual disability.

NBC may boast that they’ve cast an African-American star in a role made famous by a Caucasian. But I’m afraid NBC missed a golden opportunity to take non-traditional casting to a higher level.

The pilot is typical of most network fare. “Ironside” doesn’t break any new ground. Underwood’s channeling of the gruff Burr feels like a pale Denzel Washington imitation, reminiscent of his “Training Day” role. Underwood’s Ironside is a tough, brooding, sadistic cop on the edge who is willing to break the rules and the laws to bring criminals to justice.

The opening segment should have been enough to turn me off. A suspect is dragged by his collar and tossed into the backseat of a car. Ironside moves from his sporty wheelchair to the backseat. He beats a confession out of his suspect, who reveals the license plate number of the car hiding a missing child. As Ironside’s chief berates him for his unethical tactics, the child is found.

The teaser draws to its end as the suspect asks, “Are you really a cripple?”

For me, growing up disabled, the word “cripple” was highly offensive. But “Ironside” doesn’t seem worried about offending its audience. “You tell me,” Ironside retorts.

Underwood and director Peter Horton are TV veterans with impressive resumes. There’s no debating Blair’s charisma, vocal acuity and, good looks, nor Horton’s ability to tell a story. Writer Michael Caleo did some research and made some good updates from the original.

But what’s missing is believability.

It’s difficult to believe the New York City Police Department would reinstate a detective disabled in the line of duty, hand him a gun and place him back on the streets. Having never walked, I can’t say for certain. But it seems to me that his two years rehabilitation is not enough time to regain his physical strength and mental stability after sustaining a life-changing injury.

The dialogue and plot are cheesy and too often rely on “Arrow”-esque grainy flashbacks of the formerly upwardly mobile Ironside. These scenes feel like justification for casting a non-disabled actor. Ten years past the WB used such a ploy when it cast Dina Meyer to portray Barbara Gordon, the former Batgirl in “Birds of Prey.

In a previous Wrap article by Greg Gilman, “Sons of Anarchy” star Kurt Yeager is quoted as stating, “You need to start having disabled people playing disabled characters. Period.” I have to agree. Every actor looks for a big break. Imagine what a role like Ironside might have done for a guy like Mitch Longley, of “Las Vegas” and “General Hospital” fame.

Over the years actors with disabilities have heard a bevy of excuses. Producers cite insurance issues, or claim there aren’t enough experienced disabled actors. It’s the old Catch 22: Where can they get experience if not granted an opportunity to land these roles?

I would like to take NBC executives through their own personnel files, since they are bringing back stars like Underwood, Michael J Fox and Sean Hayes. There’s Longley, the paraplegic star who spent six seasons on “Las Vegas.” There’s Daryl Mitchell, whose credits include two NBC series, “The John Larroquette Show” and “Veronica’s Closet.” “Christopher Thornton” was to star in The Farrelly Brothers’ “I’m With Stupid,” an NBC comedy that never made it to air.

No one is demanding we get the work due to our situation, by any means. We want the best actor to get the job. But it’s impossible to say who the best actor is when so few actors with disabilities are getting equal opportunities for work as they should. I acknowledge and respect the work of Robert David Hall, R.J. Mitte, Jamie Brewer, the “Push Girls” and Danny Woodburn, but a little is not enough.

I have grown tired of the excuses. Other underrepresented groups have banded together and brought attention to the fact that they’re underrepresented in the media. The disabled community, a fractured group of clandestine tribes, each with its own agenda, has yet to offer a unified voice. That allows shows like “Ironside” to happen.

BIO Robert Romani
Robert is a musician, actor and teacher who graduated from Rowan University with a degree in Music Education with a minor in Speech Theater. He's currently a candidate for an MA in Arts Administration from Philadelphia's Drexel University. Robert was born with a disability. He currently lives in Los Angeles.

Robert is a musician, actor and teacher who graduated from Rowan University with a degree in Music Education with a minor in Speech Theater. He's currently a candidate for an MA in Arts Administration from Philadelphia's Drexel University. Robert was born with a disability. He currently lives in Los Angeles.