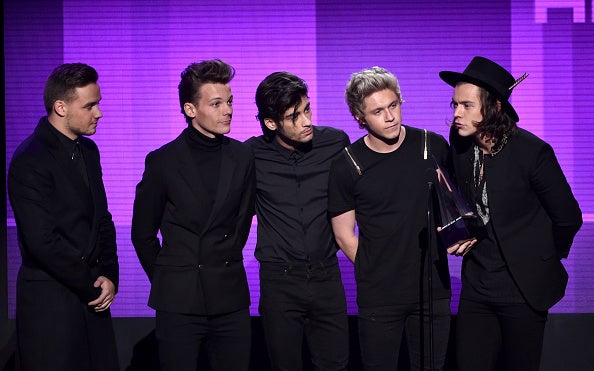 One Direction staged a mini British invasion at Sunday’s American Music Awards from the NOKIA Theatre in Los Angeles.

The boys — Harry Styles, Zayn Malik, Niall Horan, Liam Payne and Louis Tomlinson — were all accounted for. The heartthrobs performed their latest single “Night Changes,” from their just-released album,  “4.”

They also picked up some significant hardware: trophies for Favorite Band, Duo or Group – Pop / Rock, Favorite Album Pop / Rock and the top honor of Artist of the Year, beating out Beyonce.

Walking the red carpet earlier, the band gabbed with E!’s  Guiliana Rancic about another recent honor, meeting William and Kate the Duke and Duchess of Cambridge.

“I said congrats on the child,” said Styles of his interaction with pregnant Kate,”I might have said bump.”

“We were chosen to meet them as they were arriving,” Horan said, “so we were put in a bit of an awkward situation. But they were great, everything you would think [they were].”

Watch them talk about their royal meeting.