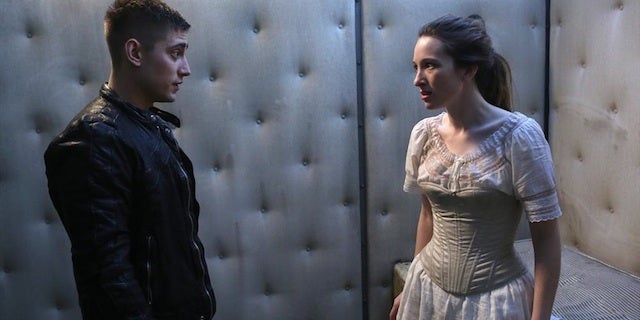 After revealing its 2013-2014 programming schedule at Tuesday's upfronts, ABC released first looks at its new series.

"Back in the Game": Terry ("Psych's" Maggie Lawson), a recently divorced, single mother, moves in with her estranged father (James Caan), a beer swilling ex-baseball player, and reluctantly starts coaching her son's (Griffin Gluck) little league team and is drawn back into the world of sports she vowed to leave behind. Executive produced by Mark Cullen, Robb Cullen ("Las Vegas"), Aaron Kaplan, John Requa and Glenn Ficarra.

"The Goldbergs": Set in the ’80s, these are geeky 11-year-old Adam's (Sean Giambrone) wonder years, and he faced them armed with a video camera to capture all the crazy of his loving family, "The Goldbergs." Mom Beverly (Wendi McClendon-Covey) is a classic “smother." Dad Murray (Jeff Garlin) is gruff, hot-tempered and trying to parent without screaming. Sister Erica (Hayley Orrantia) is 17, hot, terrifying and not one to mess with. Barry (Troy Gentile) is 16, a grade-A spaz with classic middle child syndrome. Adam (Sam Giambrone) is the youngest, a camera-wielding future director who’s crushing on an older woman. Rounding out the family is beloved grandfather Al “Pops” Solomon (George Segal), a shameless Don Juan who’s schooling Adam in the ways of love. “The Goldbergs” was written and executive-produced by Adam F. Goldberg (“Breaking In,” “Fanboys”) and also executive produced by Doug Robinson.

"Super Fun Night": Kimmie Boubier (Rebel Wilson) and her two best friends, Helen-Alice (Liza Lapira) and Marika (Lauren Ash), have had a standing date every Friday night for the last 13 years. However Kimmie’s recent promotion throws a monkey wrench into the tradition. Not only is she now working with her idol, “Lady Lawyer of the Year” Felicity Vanderstone (Kelen Coleman), but she meets a dashingly handsome British attorney, Richard Lovell (Kevin Bishop), who invites her to his party at a trendy club. Determined to spend time with Richard and heed Felicity’s advice to network, Kimmie sets out to convince her friends to take Super Fun Night on the road. “Super Fun Night” was written by Rebel Wilson, who also serves as co-executive producer. Executive producers are Conan O’Brien, Jeff Ross, David Kissinger and John Riggi (“30 Rock”), who also directed the pilot.

"Betrayal": An unhappily married female photographer ("Boss'" Hannah Ware) begins a torrid affair with a lawyer for a powerful family. When he turns out to be defending a murder suspect who is being prosecuted by her husband (Chris Johnson), the relationship and the case begin a spiraling series of betrayals with cataclysmic results for everyone involved. Executive produced by David Zabel, Rob Golenberg and Alon Aranya.

"Killer Women": The only woman in the notoriously male Texas Rangers, Molly Parker ("Battlestar Galactica's" Tricia Helfer) is a ballsy, beautiful badass who knows how to get to the truth and isn't afraid to ruffle a few feathers on her way there. Based on the Argentine series "Mujeres Asesinas." Executive produced by Sofia Vergara, Martin Campbell, co-stars Marc Blucas ("Buffy the Vampire Slayer").

"Resurrection": Examines what happens when the people you have mourned and buried suddenly appear on your doorstep as if not a day's gone by. The lives of the people of Arcadia are forever changed when their deceased loved ones return. Based on a novel by Jason Mott. Executive produced by Aaron Zelman ("Criminal Minds"), Omar Epps stars.